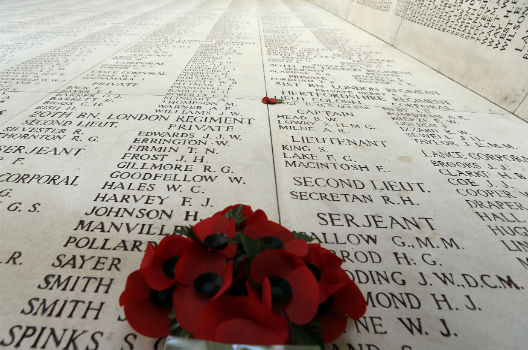 Poppies adorn a monument for soldiers of the former British Empire and its allies, who died in the Ypres Salient during World War I, at the Menin Gate memorial in Ieper, June 25, 2014 (REUTERS/Pascal Rossignol)

ABU DHABI—My reading choice aboard a fourteen-hour flight from DC to the United Arab Emirates, in a nod to this week’s centennial of World War I armistice, was Norman Angell’s 1909 book, “the Great Illusion.”

Its thesis, proven catastrophically wrong a few years later with the deadliest war in human history, was that great power conflict had grown obsolete. The rising forces of globalization, economic integration and technological advance, the Nobel Peace Prize laureate argued, made such conflict unthinkable among nations with so much to lose and little to gain.

Turning the pages while flying over our increasingly disorderly planet, I find the similarities to our times inescapable, both in the overwhelming arguments against conflict and growing chance it might occur. On the Great War’s anniversary, it’s a good time to ask: How can we prevent a World War III among countries with even more devastating, technologically advanced might and economic interdependence?

Angell’s “Great Illusion” turned out to be tragic delusion. By failing to anticipate the prospect of war between a rising Germany and a declining United Kingdom, the U.S. and others took too few steps to prevent it. Similarly, events are unfolding today on four continents where delusional thinking could cloud the necessity for strategic response and preventive action.

Those delusions, detailed below, are 1) U.S.-Chinese military conflict is inconceivable; 2) Europe is fine and U.S. transatlantic engagement of reduced significance; 3) Middle Eastern problems can be contained, and 4) that U.S. global leadership is assured.

And don’t forget it was only after a second World War that the U.S. and its allies responded by creating a set of alliances, institutions, practices and relationships that have since brought the world one of its longest periods of peace and progress.

The United Nations, the World Bank, the IMF, NATO, the European Coal and Steel Community, our Asian alliances and more were this period’s legacy. Though they were designed to adapt, they have been slow to do so to accommodate rising powers and address emerging risks, thus increasing the chance of conflict.

So, what does survival look like across “the four delusions?”

“Today,” writes strategist Graham Allison, “the intensifying rivalry between a rising China and a ruling United States could lead to a war that neither side wants and that both know would be even more catastrophic than World War I.”

Those tensions have increased in no small part due to Chinese leader Xi Jinping’s increased flexing of economic and military muscle, and President Trump’s determination to push back, born more by a sense of grievance than of history.

In Asia this week for three major summits, Vice President Mike Pence rallied allies and warned of a new Cold War if Beijing didn’t give ground to Trump on major economic, military and political issues when they meet at end-November on the margins of the G20 in Argentina.

What’s most required seems least likely: a strategic dialogue aimed at creating structures and habits that would prevent, defuse and manage crises.

Delusion #2: Europe is fine, and U.S. presence there of reduced significance

Europe is not fine, and U.S. presence has rarely been more urgently required.

The current picture has contradictions. The U.S. has increased its commitments and NATO has lifted its performance in the face of the Russian threat, which is good. Not good are divisions between key European allies and President Trump alongside strains within Europe.

From October 25-November 7, NATO was engaged in Trident Juncture, its biggest military exercise since the Cold War, with some 50,000 personnel, 65 ships, 250 aircraft, and 10,000 vehicles engaged in the mock defense of Norway after an invasion by a “near peer” adversary.

Four days later President Trump’s visit to Paris for the World War I centennial sullied this demonstration of allied camaraderie as he skipped much of the observance, including a symbolic walk down the Champs Elysee with allies. In Trump’s presence, French President Macron warned against the dangers of nationalism and called earlier for “a true European army” to reduce dependence on the U.S. In France and Germany, talk of European “strategic autonomy” is growing.

That approach will only divide Europe further, as both Nordic and Central European states want nothing of it. Their greatest worry: that the U.S. won’t be there when Russia tests them.

Delusion #3: The Middle East’s problems can be contained

The lesson of global terrorism and the refugee waves that have inflamed European politics is that what happens in the Middle East doesn’t stay in the Middle East. A growing U.S. confrontation with Iran, the ripples from the brutal Khashoggi murder in Saudi Arabia, and ongoing civil wars in Yemen, Libya and Syria have significantly increased the immediate risks.

Message to the U.S. and its European and regional allies: don’t let these crises go to waste.

It’s time for a deeper global effort to forge a more sustainable, strategic response to contain and then end the region’s wars and unlock the human potential of its young population.

This is a hard fix, given regional animosities and American weariness of Middle East engagement. It will take the sort of institution-building and peace-making – between Iran and Saudi Arabia, between Israel and the rest – that remade Europe after World War II.

The window is closing on our ability to shape a future to our liking.

The United States has dynamism, resources, human capital and sources of attraction that could extend its global leadership. However, with China on track to surpass the U.S. as the world’s biggest economy, it has far less leverage and relative resources than it had in 1945.

That means U.S. leaders will have to summon even more strategic and collaborative vision, renewing alliances, adapting current institutions and preventing major conflict.

To think U.S. leadership can be assured otherwise would be the mother of all delusions.