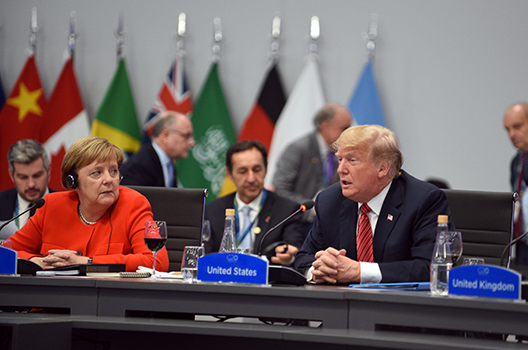 The G20 this weekend faces its biggest collective challenge since the group of world leaders first met in November 2008 in the jaws of the financial crisis. A toxic trifecta of growing political instability, escalating trade tensions and slowing global growth would be challenge enough, but the perils don’t stop there.

Beyond that, the nineteen leaders of the world’s largest economies and the European Union gather as history’s tectonic plates shift underneath them. How the G20 plays out in its group setting – and perhaps more importantly in the sideline meeting between US President Donald Trump and Chinese leader Xi Jinping – will shed light on whether today’s leaders are up to the challenge of navigating those unsettling, interlocking shifts.

They include new dangers of major power conflict; the related struggle between democratic and authoritarian capitalist systems; uncertainties about the nature of US global engagement after 70 years of relative consistency; questions regarding the relevance and capability of global institutions, including the G20, to manage emerging threats; and an escalating competition for the commanding heights of next generation technologies (and whether they will be harnessed for the common good or  will instead create a new battlefield).

So, I’ll be scoring the G20 meeting on Friday and Saturday both from the market-watcher’s lens of short-term economic impact and from the historian’s perspective of longer-term geopolitical stability. Do the most important leaders of their times have the vision, wherewithal and chemistry both to navigate present dangers and lay out an agenda to advance longer term cooperation?

What makes this moment even more perilous is that world leaders come to the table with far less cohesiveness, nursing wounds from a series of trade skirmishes.

Following President Trump’s abrupt shifts on Iran, Mexican tariffs and immigration enforcement raids, his fellow leaders hope he might be ready to do a multilateralist makeover this week in Japan and join his colleagues in common cause. Unlikely as that might sound to his critics, the emerging danger of a 2020 recession may mean that his re-election depends upon it.

Beyond that, governments and major central banks have nowhere near the fiscal and monetary tools – given low interest rates and high public debt – that were available to them before 2008 to manage unanticipated shocks.

Most worrying is that the US Federal Reserve – the closest thing to a global central bank due to the dollar’s leading role – enters this downturn with a depleted arsenal: a benchmark policy rate of 2.25 to 2.5% compared by 5.25 % in September 2007.  And Japanese and European central banks are already in negative-rate territory, so how to cut further?

Most advanced economies have more debt and larger deficits than they had in 2008. That leaves less room for stimulus spending, despite European Central Bank President Mario Draghi’s calming of global markets last week by signaling that if the economic outlook doesn’t improve, he might restart using monetary tools such as “quantitative easing” – the unconventional purchase of securities to increase the money supply and encourage private lending and investment.

“The monetary and fiscal interventions and private-sector backstops used after the 2008 financial crisis simply cannot be deployed to the same effect today,” writes economist Nouriel Roubini, one of the few economists to predict the US housing market crash of 2007 and 2008.  “Under these conditions, a severe enough shock could usher in a global recession, even if central banks respond rapidly.”

Particularly telling last week was Fed Chairman Jerome Powell’s reasoning for last week’s market-moving decision not only to hold rates stable but also to signal a lean toward further easing than tightening when governors next meet July 30-31. An anticipated cut of at least a quarter-percentage point — and perhaps as much as a half point — would be the first since December 2008.

Powell for months had resisted President Trump’s demands that he reduce rates – unprecedented pressure for  a US president to place on his independent central bank. Powell and Fed governors are more likely to move now, spurred more than anything else by the global impact of Trump’s trade policies and resulting tensions with China, rather than due to US economic fundamentals.

“The case for a somewhat more accommodative policy has strengthened,” said Powell last week. “It’s really trade developments and concerns about global growth that are on our minds.”

The downward growth shift is sobering. The World Bank this month cut its 2019 global growth forecast to 2.6% from 2.9% and cut its forecast for growth in trade to 2.6% from 3.6%. The World Bank had already forecast the US to slow to 2.5% in 2019 from 2.9% in 2018 and for China to slow to 6.2% from 6.6%. Those worrisome numbers are made more so by  what World Bank President David Malpass said is driving them: falling business confidence, the slowest pace of global trade growth since 2008 and sluggish growth in emerging and developing economies.

Yet to handicap the G20 meeting only through a statistical lens would misunderstand the larger forces at work.  Finding common purpose to strengthen international trade norms may be the most crucial issue before G20 leaders this week, but lurking beneath those trade tensions are political instabilities as far as the eye can see from Iran to Venezuela, and from Europe’s Brexit to North Korea.

Markets are hoping that Trump and Xi will at the very least agree to a trade truce that would avoid the imposition of additional tariffs. It will be far harder for them to achieve anything more ambitious, to cool down their escalating technology conflict or to restore trust.

The Wall Street Journal reported over the weekend that the US Commerce Department had escalated its efforts to put a brake on Chinese advances toward quantum computing by barring major Chinese developers from obtaining cutting edge US technology. Over the next 150 days, the Trump administration as well  is looking at whether to require that all next generation 5G gear used in the United States be produced outside China.

Lurking as the largest concern among G20 members are fears regarding  what experts call “deglobalization,” driven above all by fears of an increased decoupling of the US and Chinese economies. Markets haven’t even begun to price in that danger and its potential impact on product costs and existing supply chains.

So resist the temptation on this summer weekend to turn off the news from Japan to enjoy more leisurely pursuits. This week’s G20 provides a front-row seat for the unfolding of a new era.