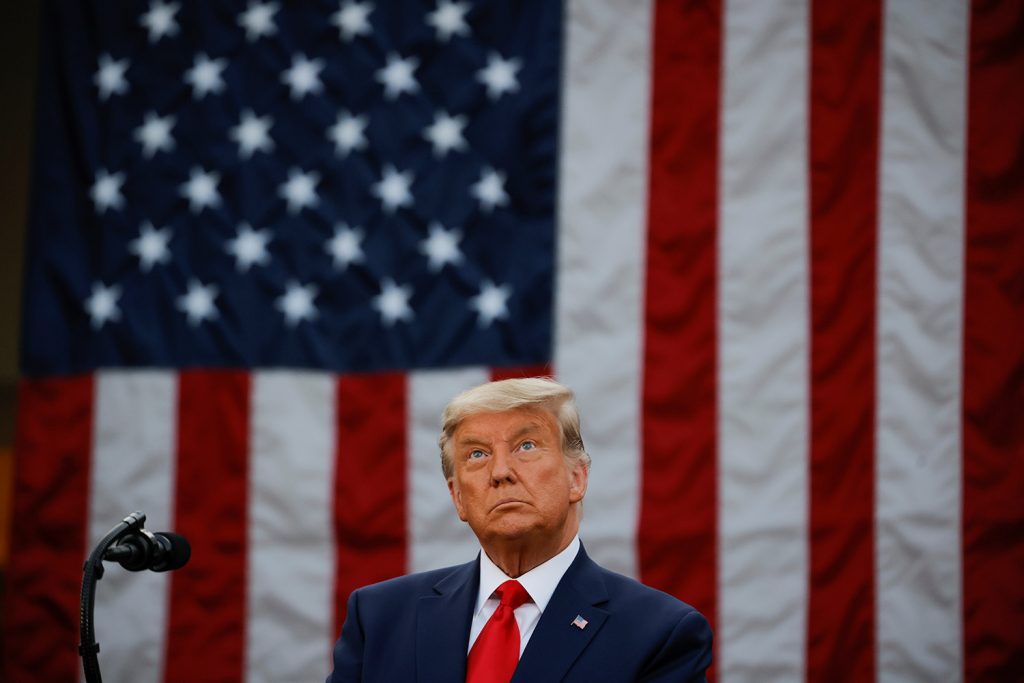 President Donald Trump’s continued refusal to concede the 2020 election poses a host of national security dangers. However, the most hazardous of them all won’t be found on the conventional list of threats that occupy Washington’s legion of foreign-policy experts.

That doesn’t mean there isn’t potential for increased peril across the usual list of concerns: China, Russia, Iran, North Korea or terrorism. It’s just none of them—as significant as they are—pose as existential a danger to US interests at home and abroad as the growing prospect of continued domestic political polarization and growing cultural divides.

Those, in turn, prompt adversaries to seek advantage by fueling these divisions and finding advantage in them. It leaves even the most hopeful of allies, encouraged by President-elect Joe Biden’s commitment to restoring a more traditional US approach to international common cause, hedging their bets.

President Trump’s actions following his electoral defeat, which won’t alter the outcome that he leaves office on January 20 next year, underscore his intention to remain as the Republican Party’s most significant force and thus a continued international rallying point for populist and nationalist politicians across the world.

The closer Trump’s day of departure comes, the more he talks to friends about preparing the ground for a 2024 run to retake the office he is so reluctantly leaving. He promises to be as untraditional a former president, remaining in the spotlight through whatever means prove to be most effective, as he has been in office.

President-elect Biden wishes to counter President Trump’s continued influence and fulfill his goal of being a unifying leader for all Americans and for global democracies. If he can do that, his team believes he could be one of those transformative presidents that comes along now and again at historic moments. What could be more so than our time of health crisis, economic threats, and authoritarian resurgence around China’s rise and democratic weakness?

To achieve that outcome, his team first must slay the Trump dragon, which remains their most significant obstacle. To do so, they’ll need to study the four central motivations for President Trump’s actions that have followed the November 3 elections.

The dilemma for the Biden team is that if President Trump achieves these four goals, he is far more likely to retreat quietly from office. However, his success in doing so also would ensure that he would remain as an immovable obstacle.

Republican leaders, particularly those in the Senate, who have failed to criticize President Trump or call for him to concede the election, privately cite several motivations.

First, they say they don’t want to corner Trump, which they believe would make him more difficult as they are trying to provide him room to make his own decision to step away. Second, they recognize he won more than 72 million national votes, the most of any Republican presidential candidate in history, and thus he will have continued influence on their political futures.

Finally, the Republican party is focused on winning the two Senate runoffs in Georgia in January, where more than $100 million is likely to be spent on get-out-the-vote efforts. What’s at stake in Georgia is whether Republicans will hold the Senate. Even those Republicans who want Trump far from the scene don’t see mileage in a confrontation with him that could risk Georgia.

The 2020 elections were a personal defeat for President Trump, but they weren’t the repudiation of Trumpism that his opponents, both Democrat and Republican, had hoped. His party did better in Senate and House races than expected.

“If the 2024 Republican nominee isn’t Mr. Trump himself,” writes Brooking’s William A. Galston in this weekend’s Wall Street Journal, “it will likely be someone who embraces the president’s orientation without his loud rhetoric and character flaws.”

Wrote Galston, “Mr. Trump’s critics saw him as a threat not only to racial progress and social inclusion but to the Constitution. And they came to understand that this threat represented the culmination of long-standing trends.”

Should President Trump and Trumpism remain a central factor in American politics, even in opposition, that will have global consequences. Trump challenged party orthodoxy on alliances, the use of American power, democracy promotion, cooperative trade policy with democratic partners, as well as in the harsh tone he normalized in international statecraft.

To understand what’s driving President Trump most at the moment, a colleague pointed me to a must-read interview by Gaby Wood with him from January 2007 in the Observer of London. She closed by asking, “If no one were looking at you, do you think you’d still exist?”

Replied Trump, after a pause and with palms together in front of his face, “No. Because, honestly, I wouldn’t have any fun. There are people who are successful, but nobody knows who they are, and I say what’s the purpose? Everyone knows who I am.”

Whatever impact that might have in President-elect Biden’s ability to lead, that reality seems unlikely to go away.

This week’s top reads include:

William Galston’s rich look in the Wall Street Journal at how Trump has changed the Republican party and the world.

Richard Haass’s roadmap for Biden in Foreign Affairs on how to first repair and then build America’s role in the world.

The Atlantic Council’s Matthew Kroenig, writing in Foreign Policy, outlines why the US should view China as an ideological and not just a power challenge.

Finally, in this week of good news on the COVID-19 vaccine front, read the FT profile of the sometimes controversial couple behind the German company that has scored the breakthrough. Nicholas Christokis in the Wall Street Journal outlines why even a successful vaccine can only be part of a layered, “Swiss cheese” strategy against the virus.

Trump Remade His Party and the World
William A. Galston / THE WALL STREET JOURNAL

Much analysis of President Trump’s place in world affairs is overly superficial and focuses on some of the more theatrical elements of his personality. Gallston’s long essay is worth reading in its balance and for the historic context it provides for the Trump presidency as the end of one promising post-Cold War era and the beginning of a more challenging time.

“….the political impact of the slow recovery from the Great Recession, which had been underestimated, came into focus,” he writes. “The rise of authoritarian populism in some democracies. Britain’s decision to leave the EU, and the emergence of China as political as well as an economic adversary ended a quarter-century of optimism.”

By this version, Trump isn’t an aberration but rather the outcome after global democracy peaked in the first decade of the 21st century and was replaced by “heightened conflicts over immigration and ethnicity (that) undermined confidence that existing arrangements were adequate to deal with cultural differences.”  Read More →

Richard Haass provides the Biden administration some good advice on how to handle his daunting inbox of international challenges.

He offers up the Jewish concept of “tikkun olam,” meaning “repairing the world,” as a good starting point. Though more often used to describe a code to inspire individuals to contribute to a better world, Haass also sees it as “a code to govern by” for a world “in dire need of repair.”

He regards the first six to nine months of Biden administration foreign policy as a time for repair. After that, he writes, there will “come the opportunity, and in some areas the necessity, to build.”

He warns that the Biden administration would be misreading history if it blamed his predecessor for the international challenges he faces. “Many were in play long before Trump and will persist long after he exits office,” he writes. “A rising and more assertive China, a Russia willing to use military force and cyber-capabilities to advance its goals, a North Korea with growing nuclear and ballistic missile capabilities, an Iran committed to carrying out an imperial strategy in a turbulent Middle East, advancing climate change…”

While President Trump continues to reject President-elect Biden’s victory, a growing number of former White House officials from both sides of the aisle are expressing concern about the national security risks of a bad transition and the administration’s refusal to share intelligence briefings.

“Each transition I experienced was different,” writes Susan Rice, President Obama’s former national security advisor, “but what they shared was a recognition that our country’s national security is best served when both sides endeavor to have a responsible handoff of power.” Read More →

John Kelly, President Trump’s former chief of staff, writes that “the delay in transitioning is an increasing national security and health crisis…. Mr. Trump should order the transition process begin immediately. It is the right and moral thing to do.” Read More →

The Atlantic Council’s Matthew Kroenig challenges the narrative that the US-China rivalry should be viewed primarily as a contest of great-power politics. This would be a mistake, argues Kroenig in Foreign Policy, pointing to a wide range of implications posed by the ideological rift between America, the world’s largest democracy, and China, the most powerful autocracy.

“Ignoring these ideological differences would cause the West to overlook its significant competitive advantages with potentially disastrous consequences,” he writes. “There is an undeniable ideological dimension to US-China competition, and Washington should embrace it,” Kroenig writes. Read More →

Also make sure to buy and read Kroenig’s new book, “The Return of Great Power Rivalry.“

Inside the hunt for a vaccine: How BioNTech made the breakthrough
Joe Miller / Financial Times

This week brought the best news yet of our ongoing health crisis, that Pfizer and BioNTech had secured breakthroughs in their quest for a vaccine against the COVID-19 virus. There was so much to read about vaccines this week, but two stories caught my eye.

The first was a Financial Times’ profile of the German company in Mainz, Germany, and the husband-wife team who may have produced the breakthrough. Uger Sahin, who founded the company with his wife just a dozen years ago, calls what they’ve created “an almost perfect vaccine,” though he concedes it will be many months before they know what drives its 90 precent protection rate. Read More →

Nicholas Christakis, writing on the cover of the weekend WSJ Review section, warns that controlling COVID-19 will take a good deal more than a vaccine. “Individuals, workplaces and governments will need to consider a diverse and sometimes disruptive range of interventions,” he writes, referring to them as layers of defense “like slices of Swiss cheese in a stack.” Read More →

PERSON OF THE WEEK

Colossal ambition: How the Biden administration can revitalize the global economy

It would understandable, given the realities of a divided Congress, for a Biden administration to think small. But it would be a mistake. On both the international and domestic front the times call for colossal ambition.

An opportunity for transformational leadership

In combining attributes such as decency and respect with political acumen and long-term relationships, Biden is well-positioned to cultivate bipartisan consensus and earn public support at home, while forging a new model of US leadership in a world that has become more reluctant to follow America’s lead.

Image: US President Donald Trump pauses as he speaks about the "Operation Warp Speed" program, the joint Defense Department and HHS initiative that has struck deals with several drugmakers in an effort to help speed up the search for effective treatments for the ongoing coronavirus disease (COVID-19) pandemic, during an event in the Rose Garden of the White House in Washington, U.S., November 13, 2020. REUTERS/Carlos Barria