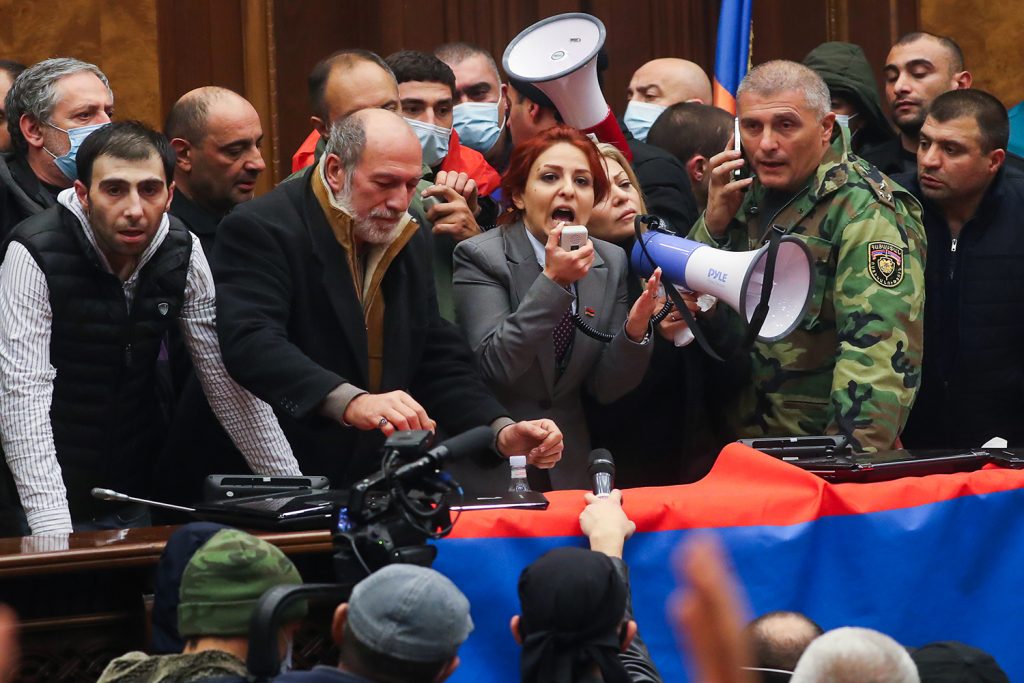 Russian President Vladimir Putin brokered another ceasefire between Armenia and Azerbaijan in their war over Nagorno-Karabakh, but unlike the three previous ceasefires negotiated in October, this one is likely to hold.  Azerbaijan President Ilham Aliyev and Prime Minister Nikol Pashinyan signed it, and Pashinyan noted publicly that it involves painful concessions. So painful in fact, that his office was besieged by angry demonstrators.

What we know of the ceasefire agreement suggests a major victory for Azerbaijan. It is a ceasefire in place, which means that the gains made by Azerbaijan’s military in taking back its sovereign territory in Nagorno-Karabakh and surrounding areas will hold. This includes the city of Shusha (Shushi in Armenian), the second largest city in Nagorno-Karabakh which overlooks the capital of Stepanakert. The agreement also includes the return to Baku’s control of some additional land near Nagorno-Karabakh. All of this will be overseen by 2,000 Russian peacekeepers who are already deployed in the region.

What explains this new status quo? When the Soviet Union imploded, Armenia won a war over Nagorno-Karabakh, an Armenian ethnic enclave in Azerbaijan, taking control of that region as well as surrounding territories that make up about 20 percent of Azerbaijan’s internationally-recognized territory. The takeover prompted ethnic cleansing that displaced nearly a million Azeris. There was a sad irony in this development because, as Putin noted last month, the conflict began with Azeri attacks on ethnic Armenians in Azerbaijan in the last days of the Soviet Empire.

But Azerbaijan had and has one advantage Armenia lacked: hydrocarbons. And while not a wealthy country, Azerbaijan’s economic prospects are better than Armenia’s; and military power is ultimately based on economic wherewithal. The initial Armenian military advantage, based in part on Russian armor and missiles, began to ebb. In this fall’s conflict, Azerbaijan has benefitted from drones and other high-tech equipment coming from Turkey and Israel. Just as Armenian military superiority established the original status quo, Azerbaijani military superiority has established a new outcome on the ground.

But other factors have also been in play. Azerbaijan’s long-time alliance with Turkey paid dividends. So too did its carefully cultivated ties with Israel. In fact, the second big winner in this new status quo is Turkish President Recep Tayyip Erdoğan. He projected Turkish influence into this long simmering standoff, and appears to have at least partially offset Russia’s predominance in the Southern Caucasus.

This is not to say that this outcome is a defeat for the Kremlin. Yes, it is true that Moscow has long both facilitated and benefitted from the long stalemate over Nagorno-Karabakh. Armenian control of Nagorno-Karabakh meant that it needed Russian protection from Azerbaijan and Turkey; and Moscow could use this support for Armenia to dissuade Baku from moving too close to the West. The successful Azerbaijani offensive has threatened to upend this calculus for both sides and has weakened Moscow’s position in the region.

But not completely. At the end of the day, it was Putin who imposed a settlement on the parties. And it is Russian peacekeepers who will enforce it. That gives Moscow a new lever to use. So this counts as a diplomatic victory for the Kremlin; even if it strengthens the influence of its principal outside competitor (Turkey) in the region. But Moscow will also take comfort from the fact that the United States has not played a decisive role in the settlement.

Moscow may have had one more reason for not acting decisively earlier to stop the fighting. Strongman Putin does not like it when civil society ousts other authoritarian leaders who maintain power by manipulating elections. So he was always skeptical of Prime Minister Pashinyan, who came to power after peaceful demonstrations. By allowing Azerbaijan to take back significant swaths of its own territory, Moscow has weakened Pashinyan’s position.

This is a difficult outcome for Armenia, as the demonstrations in Yerevan underscore. Armenia’s leadership and perhaps its population had gotten used to a status quo that their economic and military potential could not sustain. The presence of Kremlin peacekeepers makes Yerevan more dependent on the Kremlin. As Armenia’s leader when this happened, Pashinyan now faces a major challenge. How does he acclimate his people to the new reality?

While reveling in his victory, Aliyev also faces an important task. He has said before and during the conflict that the issue for Azerbaijan is its territorial integrity, and that Azerbaijan would make sure that its ethnic Armenian citizens in Nagorno-Karabakh and elsewhere were treated equally and would face no threats to their persons or livelihood. He must make good that promise.

Image: Demonstrators protesting against the end of war in Nagorno Karabakh break into the building of the National Assembly of Armenia (parliament) on 10 November 2020 Stanislav Krasilnikov/TASS.