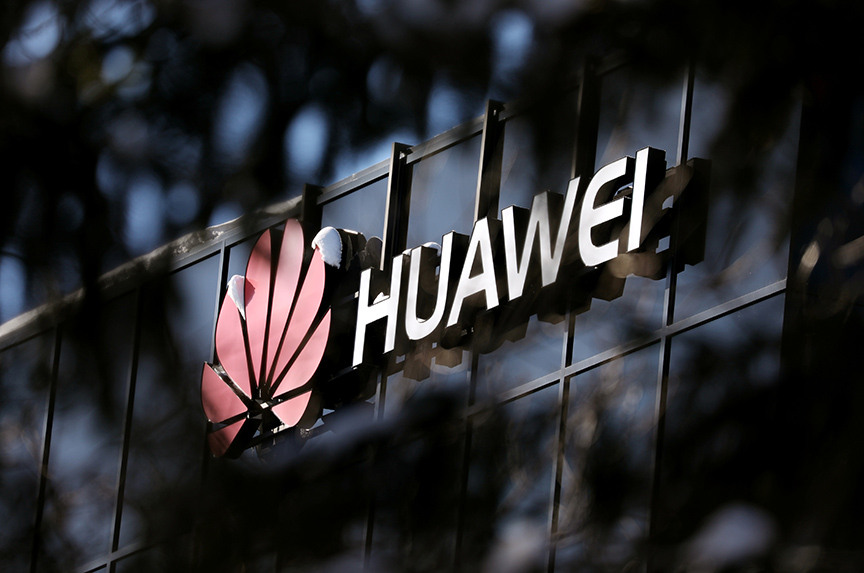 The Huawei logo is pictured outside the Chinese telecom giant’s research facility in Ottawa, Canada, on February 14. (Reuters/Chris Wattie)

It also marks the most significant test yet for the Trump administration’s shift in China policy to strategic competition from strategic engagement.

Both Vice President Mike Pence and Secretary of State Mike Pompeo were in Europe last week, which lies at the heart of the tech contest with China. Mentioning Huawei by name at the Munich Security Conference, the vice president called “on all security partners to be vigilant and to reject any enterprise that would compromise the integrity of our communications technology or our national security systems.”

To win this particular battle, the U.S. will have to play the long game, engage in painstaking global diplomacy and rediscover NATO and the European Union not as distasteful multilateral institutions but instead as crucial instruments of influence. It must deploy carrots where sticks fail, conjure innovative tech alternatives to China’s market lead, and play the unfamiliar role of underdog in places where Beijing has won the upper hand – and dominant market share.

It wasn’t so long ago that it was mostly telecom geeks and tech traders who enthused about the revolutionary nature of next generation 5G wireless technology as the world-changing platform to support everything from autonomous vehicles and life-saving medical devices to just-on-time manufacturing and fatally precise military drones.

However, what began as a scientific and commercial contest now has evolved into a technological arms race. American legislators, Western intelligence officers and even four-star generals are raising the alarm that America and its allies have fallen perilously behind in developing 5G, whose security implications are both far-reaching and generational.

“If China controls the digital infrastructure of the 21st century, it will exploit this position for national security purposes and be capable of coercive leverage over the United States and its allies,” writes General James L. Jones, former U.S. national security advisor and NATO supreme allied commander, in a recently-released Atlantic Council Strategic Insights Memo.

The significance of the challenge is a result of three issues: the game-changing nature of 5G technology, the rapid growth of Huawei and the dearth in many parts of the world of ready alternatives.

Being first in 4G wireless technology allowed the U.S. to dominate mobile platforms from Facebook to Netflix. In a report commissioned by the wireless trade association CTIA, Roger Entner from the telecom research company Recon Analytics reckons that position brought the U.S. $125 billion in revenues and expanded wireless-related jobs to 4.6 million from 2.5 million.

First-mover advantage in 5G will have far more dramatic consequences, due to the exponential growth of objects that would be connected to the internet. Entner has said that while 4G could connect 2,000 devices in a square kilometer, 5G will be able to seamlessly connect a million. U.S. officials believe that the sheer speed and countless military applications of 5G make the risk of using any Chinese equipment in a 5G network too high.

The problem is that Huawei’s reach is so broad and global that a U.S. offensive could slow it and even block it in some countries, but will be unlikely to turn it back. The danger is growing of two spheres of tech influence, with many Huawei customers arguing that the Chinese are offering far better prices, with direct and indirect subsidies, while providing better service and fielding more advanced equipment. The company now has 180,000 employees in 170 countries, 80,000 of whom are working in research and development. It counts 45 of the world’s biggest 50 wireless carries as customers.

For any country to remove Huawei from its current networks or ban it from 5G development would be costly both in money and time – sometimes in the billions of the dollars and at the expense of delaying 5G deployment for as long as two years. In Europe, Huawei has gone from a standing start a decade ago to controlling a third of the European market and, in some countries, controlling more than 70 percent of the market.

Jones spent most of the last month warning of the Chinese 5G perils in Europe – where much of the U.S. effort has focused due to the fact that its countries are closest to launching 5G networks. He tells his interlocutors this contest is too existential to be measured in money and time.

“This race, and its outcome,” he says, “rises to the level of importance of such projects as the Manhattan Project and the ‘man-on-the-moon’ efforts of the 20th century. For countries who select the Chinese alternative and the consequences attendant to such a decision, the costs of reversal will increase exponentially as they proceed.”

The problem is that the Trump administration’s approach to the issue is riddled with flaws, said allied government officials speaking off the record at last week’s Munich Security Conference.

One NATO country’s defense minister, who is sympathetic to the Trump administration case, told U.S. officials that they would help their cause more if they could lay out before NATO all the elements of a global China strategy around which allies could be rallied, just as they did before with the Soviet Union.

President Donald Trump, allied officials say, hurt the U.S. case last December when he suggested that he might intervene in the Canadian arrest of Huawei CFO Meng Wanzhou, who is also the daughter of the founder Ren Zhengfei, if it helped him close his trade deal.

Then on Thursday, with China’s special envoy Liu He in Washington, Trump again suggested that perhaps banning Huawei wasn’t necessary.

“I want the United States to win through competition,” he tweeted, “not by blocking out currently more advanced technologies.”

That statement was at odds with administration officials, who are concerned that in his desire to close a Chinese trade deal of historic proportions, the president might give ground on what is fundamentally a national security issue. Some officials want Trump to go even further – signing an executive order that would bar all U.S. companies from buying Huawei technology.

Pompeo on Thursday ratcheted up Washington’s rhetoric, telling Fox Business Network that European allies that use Huawei for critical infrastructure might find themselves excluded from U.S. intelligence sharing.

However, for the U.S. to change the tide with China on 5G, a consistency of message, a clarity of purpose, a deployment of diplomacy and framing of China strategy that is thus far lacking will be required.

The U.S. will also have to answer the most befuddling question of our emerging age: how to compete with China on a global stage where economies and supply chains are so deeply intertwined that even closest allies may not be willing or able to follow the U.S. lead to counter Beijing.

If there were any doubt how Huawei views this struggle, it was dispelled by the usually reclusive Huawei founder Ren Zhengfei, speaking to BBC: “There’s no way the US can crush us. The world cannot leave us because we are more advanced. If the lights go out in the West, the East will still shine… America doesn’t represent the world.”