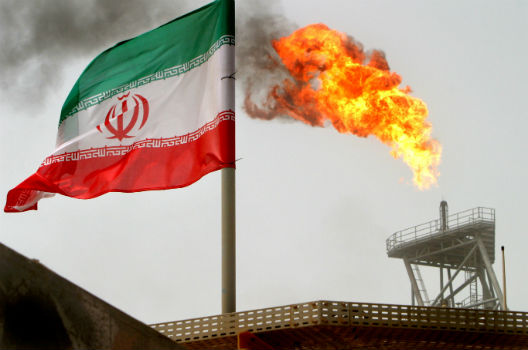 A gas flare on an oil production platform in the Soroush oil fields is seen alongside an Iranian flag in the Persian Gulf, Iran, July 25, 2005. (REUTERS/Raheb Homavandi/File Photo)

On foreign policy matters, President Donald Trump through this week’s mid-term elections has demonstrated a refreshing willingness to take on critical issues that his predecessors either avoided altogether or ineffectually kicked down the road.

His tactics can lack diplomatic elegance (mostly by intention) and anger partners, but it’s undeniable he has locked his legacy-seeking sites on what looks to be an overwhelming list of long-festering problems. Among them: NATO allies’ unwillingness to bear sufficient defense burdens, China’s unfair trade practices, Russia’s violation of a short and intermediate-range missile treaty, North Korea’s nuclear proliferation and Iran’s dangerously malign behavior.

Of all those issues, for me the Iran showdown provides the most dramatic lens through which to track whether President Trump can turn his disruptive determination into a strategic outcome of lasting significance. Without minimizing the other challenges, my wager is that the Iran issue may become the Trump administration’s most defining foreign policy challenge over the coming two years, viewed alongside North Korea as part of a dual effort to counter rogue regimes.

That’s because, first, Iran is the issue where there is the greatest alignment among top Trump administration officials on the significance and urgency of the threat. President Trump, Secretary of State Mike Pompeo, Secretary of Defense James Mattis and National Security Advisor John Bolton may disagree occasionally on tactics or the achievable end-game, but not on the priority.

Second, the administration has begun to execute a comprehensive, three-pronged “maximum pressure” campaign to alter Iran’s behavior, driven by the resourceful and tireless Brian Hook, the US Special Representative to Iran and Senior Advisor to Secretary Pompeo.

A senior US official says that approach involves intensifying diplomatic engagement to bring about greater international support and sanctions compliance, increasing deterrence against Iranian behavior by more aggressively going after the money, missiles and arms fueling its regional influence, and heightening efforts to be seen as “standing with the Iranian people,” who have wearied of their leaders’ corruption and costly misadventures beyond Iran.

In the best case, Trump administration officials would like its leverage to bring Iran back to a negotiating table to deepen and broaden the time-limited and nuclear-only JCPOA agreement struck with the Obama administration, from which the Trump administration withdrew in May. (My own strong preference would have been for the US not to have withdrawn from JCPOA in the first place, as any showdown of this significance requires having allies fully on board, and Hook had made great progress in toughening their posture. But that’s yesterday’s news.)

What President Trump would prefer over time is a full-fledged treaty that would cover all aspects of the bilateral relationship, potentially trading economic incentives and guarantees for Iran’s security and regime for withdrawal from Syria, and renunciation of terrorism and proxy warfare. Unlike the Obama deal, say Trump officials, they would seek congressional ratification to transform what they considered a flawed agreement of limited duration into a durable, airtight treaty.

It’s a fair bet that the US will fail to bring an Iran back to the negotiating table in any foreseeable future that is ready to negotiate such far-reaching concessions. Iran may even respond to heightened US pressures with more military and militant actions, perhaps even doubling-down on clandestine efforts to prepare for a nuclear weapons breakout. (Iran has not yet pulled out of the so-called JCPOA nuclear treaty, despite US departure, to keep European partners’ support)

Some argue Trump officials are hopelessly naïve to think their approach will produce the results they want. The truth is that they are more pragmatic in their thinking and execution than most media reporting on Iran suggests. They have designed their reintroduction of Iranian sanctions in August and, then again, this Monday, aimed at significantly reducing Iranian oil exports, to at the very least reduce the resources Iran has at its disposal to fund terrorism and regional Mideast proxies.

Secretary Pompeo outlined the thinking behind the administration approach in more detail than ever before in this month’s issue of Foreign Affairs, marking the first major piece written for the magazine by a high Trump administration official.

“In place of the Iran nuclear deal, President Trump has initiated a multi-pronged pressure campaign,” he wrote. He called it a “’maximum pressure campaign’ designed to choke off revenues that the regime – and particularly the Islamic Revolution Guard Corps (IRGC), part of Iran’s military that is directly beholden to the supreme leader – uses to fund violence through Hezbollah in Lebanon, Hamas in the Palestinian territories, the Assad regime in Syria, the Houthi rebels in Yemen, Shiite militias in Iraq, and its own agents covertly plotting around the world.”

Underscoring the pragmatic and patient nature of this Iran approach, the administration this week issued sanctions waivers for eight countries importing Iranian oil for the next 180 days. The countries – including India, China, Japan, South Korea, Taiwan, Greece, Italy and Turkey – now have more time to reduce oil imports from Iran while preventing any sudden shortages in global oil supplies that would inevitably have led to spikes in prices around the world, placing new strains on the global economy and increasing Iran’s earnings per oil barrel.

Thus far, President Trump hasn’t produced the sorts of foreign policy outcomes one would expect of a self-described deal-maker, with the significant exception of the renegotiated terms of the trade agreement among Mexico and Canada.  His critics say that the reason is that his disruptive approach lacks any coherent strategy or follow-through.

His defenders argue that although his methods are unconventional, his understanding of the presidential calendar conforms to past practice. The first two years of a four-year term are traditionally spent teeing up issues for resolution, so it naturally follows that the next two years should bring a harvest of deals on the myriad foreign policy matters currently in play.

The Republicans’ success this week in expanding their hold in the Senate, combined with the Democrats’ retaking of the House of Representatives, sets the table for domestic political gridlock and months of internecine battle over the Mueller investigation and other matters.

If history is any guide, that sort of political division prompts US Presidents to look for their successes abroad, where presidential prerogative is greater.  Yet of all the issues in play, this space will pay particular attention to Iran, where the stakes are so high and the range of outcomes so wide, ranging from regional war to regime change.

My own bet is that this struggle is likely to drag on for many years without clear resolution.

Schooled by a history that includes the 1953 coup d’état that removed the elected Mossadegh government and the 1979 revolution that brought down the Shah, Iran’s clerical rulers have created a system that is built to be resilient to internal and external threat.  The chance that ongoing public protests over time lead to regime change remains slim, both due to their limited size and the Iranian leadership’s unlimited willingness to use force against its opponents.

Yet it would be unwise for Iran to underestimate the Trump administration’s determination to take it on as Enemy Number One. If Iran had a wait-and-see approach before mid-term elections, that looks less viable after President Trump’s relative success.  However, Trump will need his European allies on board for a project that’s more likely to be measured in years than months.

A similar version of this commentary is published by CNBC.com as a column.