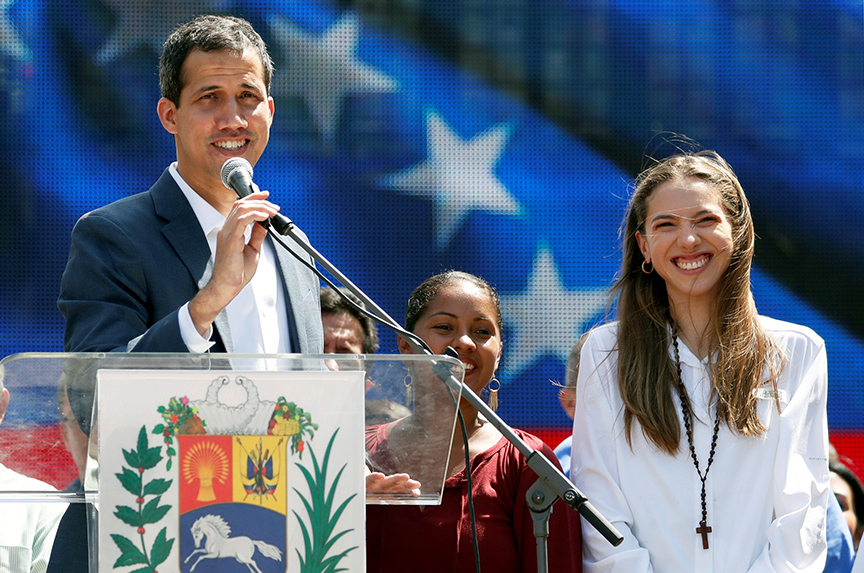 A new era of great power competition took shape in Venezuela this past week.

As the first battle of this epoch, the contest for the future of Venezuela will have outsized consequences on what forces and values – democratic or autocratic – will determine not only the country’s future but also influence the regional and global future.

As the country with the world’s largest proven oil reserves and one of its greatest humanitarian disasters, Venezuela is a place whose destiny in any case would have had outsized consequences for Latin America and global energy markets. Given the involvement of the US and its democratic allies on the one side and China, Russia and Cuba on the other, the stakes are even higher geopolitically.

President Trump’s recognition of interim President Juan Guaido on January 23, with the aim of forcing out Venezuelan dictator Nicolas Maduro, elevated the Venezuelan crisis to its most crucial test of his presidency and of the US ability to shape affairs in its own hemisphere. It also marks an opening salvo of the Trump administration’s unfolding strategy to work with regional partners in a more concerted way.

The former head of the Venezuelan National Assembly, Julio Borges, a leading player in the interim government, put it eloquently in Washington this week at the Atlantic Council. “The Berlin Wall is falling in Latin America,” he said. “What happened in Europe thirty years ago is happening now in the region.”

It’s a useful if imperfect metaphor. Just as then in Germany, the outcome is uncertain, and the impact will be generational on democracy and freedom. The chances of success, however, depend on an even more complex interaction of local, regional and global players.

Locally, Guaido thus far has succeeded where Maduro opponents previously failed in unifying the opposition, rallying widespread public and international support and laying out a vision for the future that would bring free elections and provide amnesty for security and armed forces who are not found guilty of crimes against humanity.

Regionally, the new  Brazilian and Colombia leaders Jair Bolsonaro and Iván Duque provide a significant boost to Venezuela’s chances at democratic change as part of the so-called “Lima Group,” a coalition of 14 Latin American countries plus Canada that is supporting democratic change in Venezuela. Just last month, the Lima Group issued a stinging condemnation of the Maduro regime, urging him to provisionally transfer executive power to the National Assembly and further restricting contacts with the Maduro regime.

Globally, the picture is less certain and may be most decisive.

The United States’ emerging strategy for Latin America was unveiled last November by National Security Adviser John Bolton in his “troika of tyranny” speech – putting Venezuela, Nicaragua and Cuba in the crosshairs.

“The United States looks forward to watching each corner of the triangle fall: in Havana, in Caracas, in Managua,” Bolton said, though most at the time didn’t predict the pace of action. On the same day, the US introduced new sanctions against Venezuela and Cuba, including on Venezuela’s gold sector and entities of the Cuban military and intelligence services.

This week, the US unveiled its most punitive economic actions yet against Venezuela, sanctioning its state-owned oil giant PdVSA, which remains the main source of income for the Maduro regime. It was the harshest measure yet against the Maduro regime and will immediately block $7 billion in assets and deprive Caracas of $11 billion in revenues in 2019, according to National Security Advisor John Bolton.

What Washington is up against are three authoritarian countries who have bet to one extent or the other on the current Venezuelan leadership: Cuba, Russia and China. The current showdown is a test of just how far each of these actors will go to support its Venezuelan client – and how strategic the United States, Venezuela’s interim government and other Western democracies can be in navigating these shoals.

The first indications are that a determined United States has a fair chance of helping to bring about a lasting change in Venezuela.

Over years, Havana received subsidized oil from Caracas and Cubans have assumed sensitive posts in Venezuela’s government. The daily intelligence briefing Maduro (himself educated in Havana) receives isn’t prepared by Venezuelans but by Cuban intelligence operatives. Yet as deeply entrenched as Cuba remains, Maduro’s departure would rapidly undermine its position.

Russia and China both seem to be hedging their bets, disappointed themselves at Maduro’s leadership and hoping to preserve their economic and political influence in the country in any case. Those include considerable Russian holdings in the Venezuelan energy market – and some $50 billion that China has extended in loans to Venezuela over the past dozen years – some $20 billion still owed.

Moscow is out in front in insisting that Maduro remains Venezuela’s legitimate leader, and that the United States is essentially supporting a parliamentary coup. At the same time, however, Kremlin spokesman Dmitry Peskov said this week that the Kremlin wasn’t engaged in discussions to extend major financial or military assistance to the Maduro regime.

Russia in any case would lack logistical capacity to provide decisive help at a time when its larger and more immediate priorities are in Ukraine, ahead of elections in March, and Syria, with the impending US withdrawal.  Putin also faces a stagnating economy and falling popularity at home.

In a move apparently designed to calm Chinese and Russian concerns, Guaido has told Reuters that he sent communications to both powers. “What most suits Russia and China is the country’s stability and a change of government,” he said. “Maduro does not protect Venezuela, he doesn’t protect anyone’s investments, and he is not a good deal for those countries.”

Said Chinese Foreign Ministry spokesman Geng Shuang, ”We believe that no matter how the situation develops or changes, cooperation between China and Venezuela will not be damaged.”

With stakes so high, one must hope the United States, Latin American democracies and European Union countries show determination equal to the historic challenge. (The EU member states haven’t yet recognized the interim president but are expected to do so by Monday when a deadline for Maduro to call fresh elections isn’t met.)

In a world where democracies have been fraying and autocracies rising, a democratic win in Venezuela would have outsized significance.

(Editor’s note: A similar version of this commentary is published by CNBC.com as a column.)

This week’s top reads focus on Venezuela and our emerging era of great power competition.

Don’t miss the US Intelligence Community’s worldwide threat assessment, released this week, or this week’s must read by the Wall Street Journal’s Yaroslav Trofimov on what’s driving the deepening ties between China and Russia that the report identifies as a central concern.

The Trump administration’s efforts to help restore democracy in Venezuela marked the opening move in a larger strategy “to exert greater U.S. influence over Latin America,” the Wall Street Journal reported this week. It cites a November speech on the “troika of tyranny” by National Security Adviser John Bolton that takes aim at Venezuela, Cuba and Nicaragua. (Read the speech here.)

“In sight,” write the WSJ reporters, “isn’t just Venezuela’s Nicolas Maduro, but also Cuba, an antagonist that has dominated American attention in the region for more than 50 years, as well as recent inroads made by Russia, China and Iran.” Read More →

#2 THE VENEZUELAN “TRIAL OF STRENGTH”

The Battle for Venezuela’s Future
THE ECONOMIST

Venezuela’s Failed Revolution may itself be Overthrown
THE ECONOMIST

The Economist devotes its cover and much of the inside of the magazine to Venezuela.

It sizes up the situation as “a trial of strength … that could restore normality to what was once one of the region’s richest countries. Equally, the Trump-Guaido gambit might lead to conflict between armed groups or simply fail.”

The cost of failure would be to the suffering Venezuelans, some three million of whom have already fled to neighboring countries, and to American prestige.

The Economist outlines ways the world can help through “incentives for Venezuelans to demand change, for the army to abandon the regime and for Mr. Maduro to go.” In a separate piece, it outlines a path toward rapid improvements to the collapsed Venezuelan economy that will be necessary fast – removing price controls, building a social safety net, restarting the oil industry with foreign investment and restructuring debt.

Oh yes, amid all that the interim government needs to hold free elections. Read More →

Is Huawei a Pawn in the Trade War?
Robert Williams / FOREIGN AFFAIRS

Don’t get too distracted by ongoing US-China trade talks, as vital as they are.

The biggest China-related development this week was the US indictment against China’s telecommunications giant Huawei on charges of breaking US sanctions on Iran and for stealing American intellectual property.

“According to the indictment,” writes the Washington Post, “Huawei’s approach resembles that of the Chinese state: it is unbound by a rules-based, law-governed international order and it is determined to succeed by using theft and duplicity.” Read More →

“…both stem from the growing tensions and mistrust between Western states and China in matters of technology, economic policy and national security. Both are driven, in part, by the fear that the Chinese Communist Party’s grip on the country’s private sector means that Chinese companies cannot truly be independent from the Chinese state.” Read More →

Intelligence Chief Dan Coats Testifies on Threats from China, North Korea
CBS News In a must-read report (and must-hear testimony by Director of National Intelligence Dan Coats), the US Intelligence Community this week provided a comprehensive analysis of threats to US national security spanning all regions and domains – and in some respects contradicting the commander-in-chief.

Its central theme was its emphasis on great power confrontation:

“Threats to US national security will expand and diversify in the coming year, driven in part by China and Russia as they respectively compete more intensely with the United States and its traditional allies and partners. This competition cuts across all domains, involves a race for technological and military superiority, and is increasingly about values.” Read More →

The New Beijing-Moscow Axis
Yaroslav Trofimov / WALL STREET JOURNAL Dan Coats, U.S. Director of National Intelligence, this week said, “China and Russia are more aligned than at any point since the mid-1950s,” and he said threats to US national security from that closer alignment would expand and diversify.

With that as context, Trofimov provides a balanced and nuanced read in his WSJ Weekend Essay on the drivers and durability of this new Beijing-Moscow axis.

Russia wants to break the existing international order while China still profits from it though wants it modified, say his sources. That said, the two sides have broadened security and economic cooperation against their common US rival to create ties that President Xi has said are “at their best period in history.”

How skillfully the US navigates this challenge will define our times. Read More →

Image: Juan Guaidó, the president of Venezuela’s National Assembly who is recognized by the United States as Venezuela’s interim president, and his wife, Fabiana Rosales, attended a rally against Nicolás Maduro’s government in Caracas on February 2. (Reuters/Carlos Garcia Rawlins)