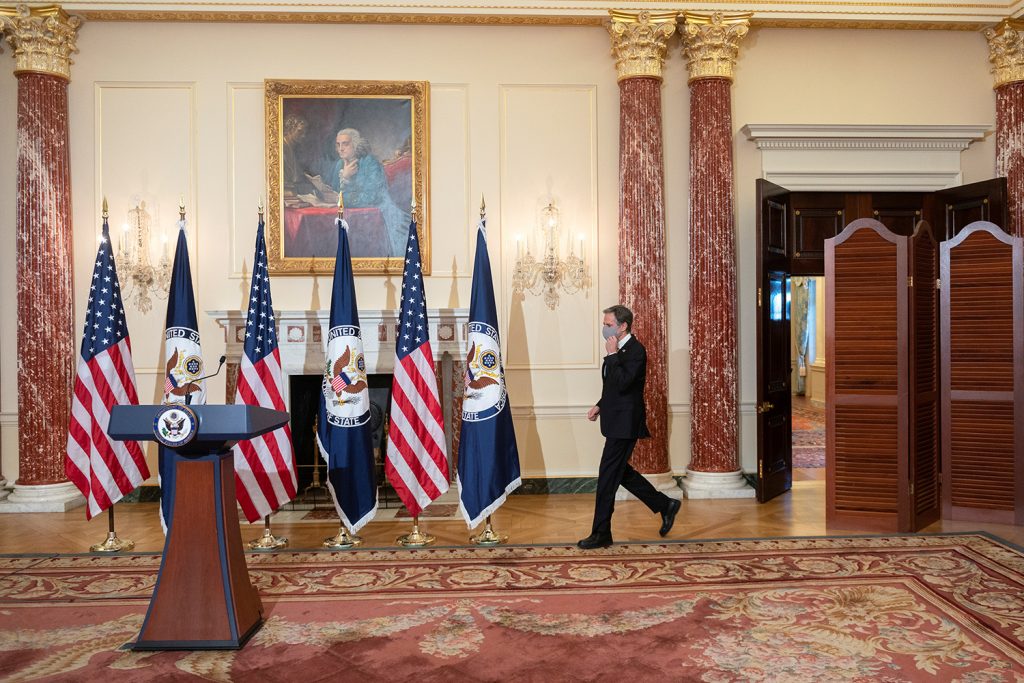 Who is going to organize the world? And what forces and whose interests will shape the global future?

Those were the underlying questions behind two events this past week, one in Washington and the other in Beijing, that set the stage for the geopolitical contest of our times.

The Washington piece was President Joe Biden’s release of the “Interim National Security Strategic Guidance,” which is unprecedented at this stage in a new administration. Biden’s purpose was to provide early clarity about how he intends to set and execute priorities in a fast-changing world.

Secretary of State Antony Blinken laid out the thinking behind the guidance in his first major speech since entering office. It was a compelling one, underscoring the urgent need to shore up US democracy and revitalize America’s alliances and partnerships.

“Whether we like it or not, the world does not organize itself,” Blinken said. “When the U.S. pulls back, one of two things is likely to happen: either another country tries to take our place, but not in a way that advances our interests and values; or, maybe just as bad, no one steps up, and then we get chaos and all the dangers it creates. Either way, that’s not good for America.”

Relations with China, which Blinken called “the biggest geopolitical test of the 21st century,” are the wrench in this organizational thinking.

Said Blinken: “China is the only country with the economic, diplomatic, military, and technological power to seriously challenge the stable and open international system—all the rules, values, and relationships that make the world work the way we want it to, because it ultimately serves the interests and reflects the values of the American people.”

Biden’s biggest departure from former President Donald Trump’s approach to China is his emphasis on working with partners and allies. This week’s move by the United States and European Union to ease trade tensions, suspending a long list of tariffs related to the Airbus-Boeing dispute over government subsidies, underscores Biden’s seriousness of purpose.

China’s take on organizing the world

Unsurprisingly, Beijing is offering up a different view of the future around the second key event this past week: China’s National People’s Congress that convened Friday and will continue this coming week.

Chinese President Xi Jinping sees momentum building for Beijing in a world where “the East is rising, and the West is declining.” His argument was that China offers order, in contrast to the United States’ chaos, and effective governance, in contrast to Washington’s ineffectiveness, demonstrated by how much better it has handled the pathogen it unleashed.

Xi’s most comprehensive swipe at how China would organize the world came in late January at this year’s virtually convened World Economic Forum. The speech’s title underscored its all-embracing ambition: “Let the Torch of Multilateralism Light up Humanity’s Way Forward.”

If Biden’s vision is for the United States to create a band of reinvigorated democratic sisters and brothers, inspired by the country’s revitalization, Xi’s vision is for a world where each country’s political system, culture, and society are its own business.

In this world, America’s value judgments are passé.

The subtext for Xi is simple: How countries organize themselves internally, along with whatever authoritarian strictures and human rights violations they include—whether against the Uighur minority in Xinjiang, democracy activists in Hong Kong, or perhaps even ultimately Taiwan’s independence—just is not Washington’s business.

“Each country is unique with its own history, culture and social system, and none is superior to the other,” Xi told the virtual Davos crowd. “The best criteria are whether a country’s history, culture and social system fit its particular situation, enjoy people’s support, serve to deliver political stability …” Xi made clear this approach is meant to “avoid meddling in other countries’ internal affairs.”

By contrast, in a letter that accompanied the strategic guidance this week, President Biden wrote, “I firmly believe that democracy holds the key to freedom, prosperity, peace, and dignity… We must prove that our model isn’t a relic of history; it’s the single best way to realize the promise of our future. And if we work together with our democratic partners, with strength and confidence, we will meet every challenge and outpace every challenger.”

As democracy weakens globally, the world’s democracies must act

The context for these competing visions was this week’s release of Freedom House’s annual survey that said, “less than 20 percent of the world’s population now lives in a Free country, the smallest proportion since 1995.”

In the study, called “Democracy under Siege,” Sarah Repucci and Amy Slipowitz wrote, “as a lethal pandemic, economic and physical insecurity, and violent conflict ravaged the world in 2020, democracy’s defenders sustained heavy new losses in their struggle against authoritarian foes, shifting the international balance in favor of tyranny.”

It was the fifteenth successive year in which countries with declines in political rights and civil liberties outnumbered those with gains. The report said that nearly 75 percent of the world’s population lived in a country that faced a deterioration of democratic freedoms last year.

It may seem that this is absolutely the wrong time to expect the world’s democracies to rally to shape the global order. Yet just the opposite is true: At a time when democracy is being tested across the world, there’s no better time to work together to address these challenges and ensure that the global gains in freedom over the past seventy-five years don’t continue to erode.

Chastened by the global situation, the Biden administration knows its work must begin at home. Blinken also was modest in how the United States would go about advancing democracy.

“We will use the power of our example,” he said. “We will encourage others to make key reforms, overturn bad laws, fight corruption, and stop unjust practices. We will incentivize democratic behavior.”

What the United States won’t do is promote democracy “through costly military interventions,” said Blinken, “or by attempting to overthrow authoritarian regimes by force. We have tried these tactics in the past. However well intentioned, they haven’t worked.”

In the end, the world is not going to be organized either by Chinese or American fiat, but rather by a concert of national interests influenced by the trajectory of the world’s two leading powers.

Xi’s bet is that China’s momentum is unstoppable, that the world is sufficiently transactional, and that his economy has become indispensable to most US allies. Biden must not only shift that narrative but also work in common cause to reverse the reality of democratic weakening.

Blinken’s first major speech in office, laying out the eight priorities from Biden’s Interim National Security Strategic Guidance, is one worth reading in its entirety.

Those priorities include global public health, rebuilding the economy, renewing democracy, immigration, revitalizing ties with allies and partners, the climate crisis and green revolution, technology leadership, and managing “the biggest geopolitical test of the 21st century: our relationship with China.” ​​​​Read More →

#2 The U.S. is quietly mobilizing its economy against China
David Ignatius / THE WASHINGTON POST

“Without much public debate, the United States is moving toward what amounts to a U.S. version of industrial policy to compete with China on technology,” writes David Ignatius in the Washington Post, building off this week’s report by a bipartisan commission on artificial intelligence.

“The changes that artificial intelligence will bring to everything that touches digital technology dazzle even the most buttoned-down experts in the field,” writes Ignatius. “That’s why members of the commission and others close to this issue are so agitated about the need for radically increased U.S. efforts: They literally think our future is at stake, militarily, economically and even politically.” Read More →

“Like it or not, a twenty-first century ‘scramble for Africa’ is underway” write Marcus Hicks, Kyle Atwell, and Dan Collini in Foreign Affairs.

In their essay, the authors argue that an increased presence of China and Russia on the continent will “necessitate deeper U.S. engagement.”

“If anything, great-power competition will increase the need for the United States to battle terrorists and safeguard democracy, trade, and free enterprise in Africa—but to do so with particular attention to limiting the malign influence of Russia and China,” they write. Read More →

Joshua Yaffa begins his narrative in the New Yorker with Sergey Titov, who at age twenty-eight was hired as an editor at Mash, “a fast-paced Russian news startup with offerings that alternate between trashy, ironic, and would-be serious.”

Over time, Titov sensed he was becoming part of a propaganda machine influenced by the Kremlin and its “political technologists,” who took a greater interest in Mash as it grew more popular. Finally, following a series of events after the August poisoning of Russian opposition leader Alexei Navalny, Titov quit his job in January.

Yaffa explains how since the poisoning, Navalny’s release of a video documenting Putin-related corruption, and then his return to Russia and his arrest, more people have followed Titov’s path.

“Slowly, and in small numbers, Russians who previously formed part of the system, however loosely defined, are [reevaluating] their compromises, questioning whether the price of success—or merely getting by—has become untenable.” Read More →

This week’s must-read dissects the annual Freedom House survey, marking the fifteenth consecutive year of decline in global freedom, both in the cruelest dictatorships and in long-standing democracies.

“The ongoing decline has given rise to claims of democracy’s inherent inferiority,” write Repucci and Slipowitz. They chronicle how Chinese and Russian commentators and anti-democratic actors within democratic states are working for a common cause.

“They are both cheering the breakdown of democracy and exacerbating it,” write the authors, “pitting themselves against the brave groups and individuals who have set out to reverse the damage.” ​​​​Read More →

Person of the week

A rebuttal to Russia’s narrative about the West, grounded in history

A recently compiled trove of historical documents constitutes a profound rebuttal of a false narrative, contradicting Moscow’s complaints about NATO through the words of Russia’s own top officials and experts. In an age of widespread disinformation and malign revisionism, the collection provides an accurate account of the NATO-Russia relationship.

Image: US Secretary of State Antony Blinken arrives to deliver remarks about priorities for administration of US President Joe Biden in the Ben Franklin room at the State Department in Washington, U.S. March 3, 2021. Andrew Caballero-Reynolds/Pool via REUTERS