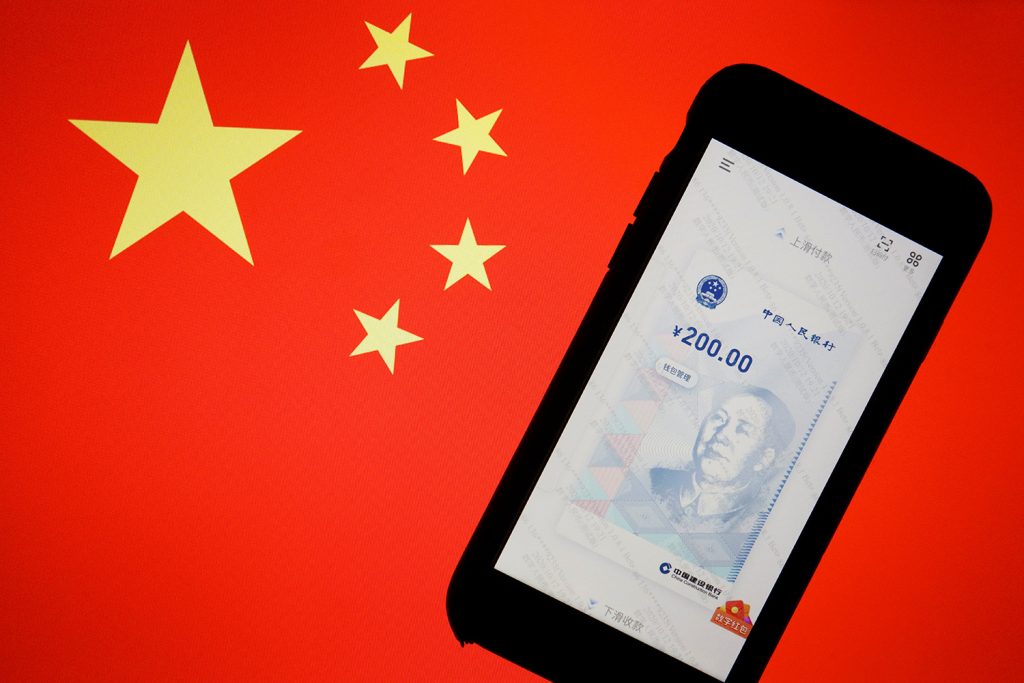 Chinese officials have made it no secret that their greatly accelerated efforts at introducing and distributing the digital yuan are an opening move in their long-term strategy to undermine the dollar’s global supremacy and expand their influence.

Despite that, leading US financial officials have rolled their eyes at any suggestion that deeper dangers lurk for the dollar, and thus also for US national security, in the global digital currency race. Even as China marches forward and bitcoin’s market value reaches one trillion dollars, the US Federal Reserve had been in no hurry to be a contestant.

This week marked a public turning point for the most significant US government officials engaged in international finance—Treasury Secretary Janet Yellen and Federal Reserve Chairman Jerome Powell. Josh Lipsky, director of the Atlantic Council’s GeoEconomics Center, tweeted that it marked “the firing of a starting gun.”

At a New York Times event on Monday with Yellen, a question from CNBC’s Andrew Ross Sorkin prompted the Treasury Secretary’s most full-throated encouragement yet of a digital dollar, or Central Bank Digital Currency (CBDC). Though Sorkin called Yellen’s attention to an Atlantic Council survey with Harvard’s Belfer Center, which shows that seventy countries are now exploring digital currency, Yellen’s focus was instead on the domestic good a digital dollar could do for Americans.

“I think it makes sense for central banks to be looking at it,” said Yellen.

“I gather that people at the Federal Reserve Bank of Boston are working with researchers at [the Massachusetts Institute of Technology] to study the properties of it. We do have a problem with financial inclusion. Too many Americans really don’t have access to easy payment systems and to banking accounts. This is something that a digital dollar, a central bank digital currency, could help with. And I think it could result in faster, safer, and cheaper payments.”

In congressional testimony a day later, Powell also broke new ground, calling the digital dollar “a high priority project for us.” He added, “We are committed to solving the technology problems, and consulting very broadly with the public and very transparently with all interested constituencies as to whether we should do this.”

Yet while the Fed consults, China executes.

Neither Yellen nor Powell mentioned China’s growing lead in digital currency development, yet that was the context. Their call-to-action coincides with China’s announcement earlier this month of a significant partnership with the European-based cross-border payment system SWIFT, removing all doubt that Beijing intends to internationalize the digital yuan.

At the same time, China has concluded a free trade agreement (FTA) with Mauritius, its first with an African country, in a deal that is designed to create a digital financial testing ground. “As China evolves its digital currency plans, it may ultimately be Mauritius that leads in this area for Africa,” write experts Lauren Johnston and Marc Lanteigne for the World Economic Forum. The FTA agrees to promote “the development of a Renminbi clearing and settlement facility in the territory of Mauritius.”

This all comes as Beijing authorities took advantage of Chinese New Year celebrations on February 12 to deploy three large-scale pilot projects to distribute digital yuan worth roughly $1.5 million in “red packets” with about thirty dollars each. Then this week, China expanded its testing program of digital currency handouts to the city of Chengdu, the capital of Sichuan province and the fifth most populous city in the country, where it is distributing some six million dollars in digital yuan.

China’s ambition appears to be laying the groundwork now for the digital yuan’s coming out party at the end of 2022 at the Winter Olympics in Beijing. The speculation is that Chinese organizers might require that all attendees and athletes download an app that would ensure all their payments at the games for hotels, tickets, food, souvenirs, and more are conducted in its new, digital currency. Even if one does not experience a physical boycott of China’s Olympic games, watch for digital boycotts by the United States and other teams.

It is hard not to compare China’s current lead in digital currency development, shrugged off by US officials until now, to its early global lead in developing the 5G standard. Until the Trump administration responded alongside Western manufacturers, no one could compete with Chinese 5G providers and equipment manufacturers globally, the most dominant among them being Huawei.

China’s consistent prioritization of technological advancement underscores its recognition that throughout history the country that has taken the technological high ground in its era has most often also been the dominant international actor.

If the United States loses the high ground of financial technological innovation, combined with a weakening of the dollar’s global dominance, the benefits for Beijing would be considerable.

China’s different approach to privacy provides it a competitive advantage. The US and European need to satisfy privacy concerns will complicate CBDC development. Conversely, Beijing sees the digital yuan as a way to further strengthen its already formidable surveillance state, while also improving its ability to combat money laundering, corruption, and terrorist financing.

In a newly released paper published by the Center for a New American Security (CNAS), authors Yaya J. Fanusie and Emily Jin capture how deeply China understands the geopolitical importance of its digital currency project. They relate how Yao Qian, the former head of the People’s Bank of China’s Digital Currency Research Institute, compared China’s digital currency progress to the country’s previous advances in robotics, big data, and artificial intelligence.

Speaking before a United Nations information technology conference, “Yao posited digital currency as part of ‘the Next War,’” write the authors, referring to an article of that title in the Economist that discussed technology’s central role in US-China competition.

The Fed worries about being too hasty in introducing a digital dollar, given the stakes as the world’s reserve currency. The greater geopolitical danger, however, is how quickly the Fed is falling behind.

The United States can still win this contest if it not only quickly develops a digital dollar, but also collaborates on the creation of a digital euro, a digital pound, and a digital yen. The total firepower of these currencies would close the innovation gap quickly. It would also demonstrate the value of working with allies, a centerpiece of US President Joe Biden’s foreign policy.

A year into the COVID-19 pandemic, best-selling author Yuval Noah Harari in the Financial Times employs his expertise on the evolution of mankind to draw lessons for the future of the world.

He says that despite the suffering the world has faced this year, “2020 has shown that humanity is far from helpless. Epidemics are no longer uncontrollable forces of nature. Science has turned them into a manageable challenge.”

To be successful, however, Harari explains that we need to learn from our experience, for example by creating a pandemic-prevention system for the planet.

We would be wise to listen to his advice. Read More →

#2. WHY TRADE MATTERS IN US-CHINA CONTEST

Former US Treasury Secretary Hank Paulson spoke truth to power in TheWall Street Journal this week: unless Biden is willing to make trade one of his diplomatic priorities, and he has not done so thus far, he won’t win the contest with China.

“The U.S. and China are engaged in a strategic competition that will determine the shape of global politics this century,” writes Paulson. “But when it comes to trade, a critical dimension of that competition, America is ceding the field.” Read More →

#3. LESSONS FROM THE ARAB SPRING

A decade ago, the Arab Spring unleashed dramatic social and political upheavals across the Middle East. Writing in the New York Review of Books, Moroccan writer Aida Alami richly chronicles the story of five individuals who embody the sense of disappointment and hope of the past decade.

What ties the individual stories together, Alami writes, is that “all have felt the disappointments acutely but also see the setbacks as inevitable stages in a much longer process. The change they wanted may have been postponed, but they have not forgotten what seemed possible in 2011.” Read More →

After the Khashoggi report: How the US can respond and avoid blowback
Kirsten Fontenrose / ATLANTIC COUNCIL

The Atlantic Council’s Kirsten Fontenrose, a former National Security Council official, delivers a thoughtful reflection that Biden administration officials should read as they navigate the aftermath of Friday’s release of the declassified intelligence report on the 2018 murder of Washington Post columnist Jamal Khashoggi.

She lists six options for responses designed to preserve US interests. They are actionable and reasonable, responding appropriately to a horrendous crime while understanding that Biden administration priorities in the region will be difficult to achieve without Saudi Arabia as a critical partner. Read More →

This week’s must-read is a remarkable narrative in the New Yorker by Ben Mauk that details the harrowing experience of prisoners inside Xinjiang’s internment and labor camps.

Mauk tells the story of several survivors including Erbaqyt Otarbai, who lived in Kazakhstan but crossed over the border into China, was detained in 2017, and endured over two years of imprisonment and torture after authorities discovered  WhatsApp messages containing Islamic prayers on his phone.

The chilling live-action graphics created by Matt Huynh add a striking element as the article offers a glimpse into what life looks like inside the camps from the point of view of the prisoner.  Read More →

On February 25, the US military carried out airstrikes in eastern Syria that targeted Iran-backed Shia militias. The move is the first military action under the Joe Biden Administration. The retaliatory strike comes after a rocket attack on February 15 near the Erbil Airport that killed a US military contractor and injured several, including a US service member. With nuclear negotiations on the horizon, what will this mean for the Biden administration’s ongoing effort to re-engage Iran?

Experts react: What’s behind the crisis in Georgia?

By Doug Klain and Shelby Magid

On February 23, Georgian authorities arrested a top opposition leader, sparking a new political crisis for the country. Experts react to the latest developments and what it means for the young democracy’s future.

Image: China's official app for digital yuan is seen on a mobile phone placed in front of an image of the Chinese flag, in this illustration picture taken October 16, 2020. REUTERS/Florence Lo/Illustration