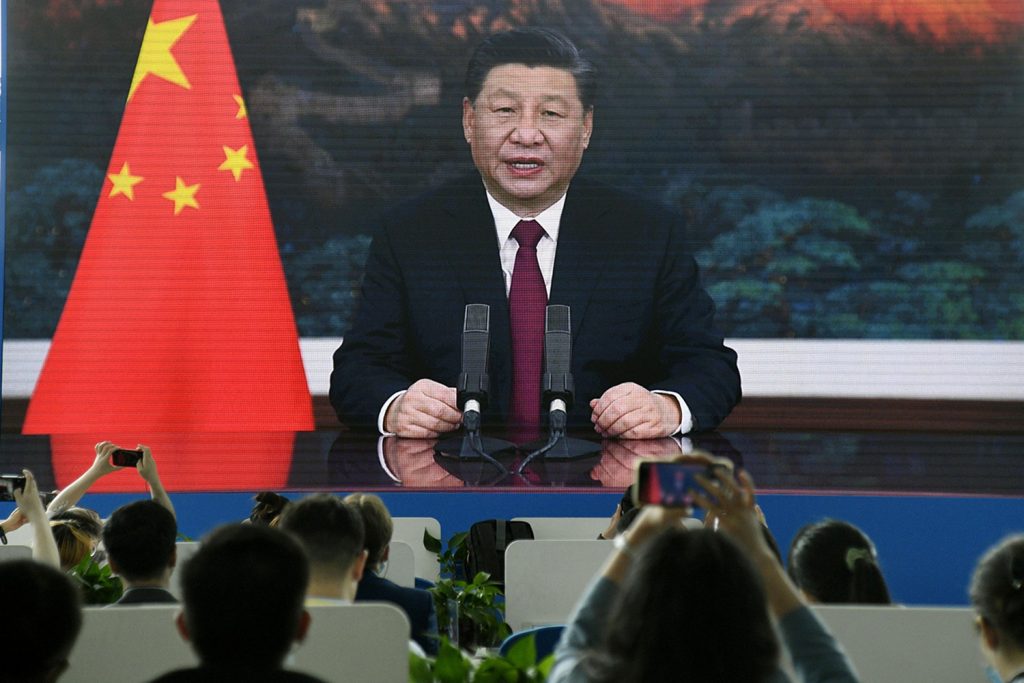 The biggest hole in the Biden administration’s otherwise encouraging efforts to better compete with China—a void that could undermine all the other pieces—is the lack of an international trade strategy.

While President Xi Jinping’s China accelerates his efforts to negotiate multilateral and bilateral trade and investment agreements around the world, both Republicans and Democrats in the United States have grown allergic to such arrangements.

“The Chinese believe deeply in the significance of the correlation of forces, and they believe that correlation at the moment is in their favor,” says Stephen Hadley, former national security advisor to President George W. Bush. If the United States fails to alter that Chinese conviction, it won’t regain the leverage needed to deal with Beijing.

“The most important missing element in changing that Chinese calculus is a trade strategy,” Hadley says—one that could rally global allies, provide American jobs and growth, and counter escalating Chinese efforts to organize the world economy around itself.

By 2018, ninety countries in the world traded twice as much with China as with the United States. By 2020, China surpassed the United States as the largest global recipient of foreign direct investment. The underlying message now is that China’s market is so large, its liquidity so deep, and its post-COVID-19 rebound so dramatic (up 18 percent in the first quarter), that no reasonable country can resist its embrace.

“In this age of economic globalization, openness and integration is an unstoppable historical trend,” President Xi said this week to the Boao Forum for Asia. Without mentioning Washington by name, he said that “attempts to ‘erect walls’ or ‘decouple’ run counter to the law of economics and market principles. They would hurt others’ interests without benefiting oneself.”

It is far too easy to punch holes in Xi’s statement: China remains rife with market protections, and state intervention at home and abroad is growing. Intellectual-property theft and cybercrimes continue.

Yet without a modern, forward-looking trade strategy, the United States enters this global punch-up with one arm tied behind its back.

“The U.S. and China are engaged in a strategic competition that will determine the shape of global politics this century,” wrote Hank Paulson Jr., the former US treasury secretary, in The Wall Street Journal. “But when it comes to trade, a critical dimension of that competition, America is ceding the field.”

Where Biden has succeeded with China—and fallen short

That undermines early wins in US President Joe Biden’s emerging approach to China.

First, Biden has profited from a bipartisan consensus, rare these days in Congress, about the urgency of rising to the Chinese challenge.

Second, Biden has begun to rally friends and allies in Asia and Europe who share his concerns about China.

Biden in March convened the first-ever leaders meeting of “the Quad,” including the United States, India, Australia, and Japan, constructed to balance China in the region. To address China’s vast vaccine diplomacy, the countries agreed to distribute a billion doses of vaccines by 2022.

Last week, Biden welcomed Japanese Prime Minister Yoshihide Suga as the first head of government to visit Washington during his administration. Their joint statement pledged, without mentioning China, “that free and democratic nations, working together” could act to resist “challenges to the free and open rules-based international order.” They also spoke of ensuring peace across the Taiwan Strait, which is the first mention of Taiwan by a Japanese prime minister in a joint statement with a US president since 1969.

And for the first time ever, the European Union (EU) on March 22 imposed economic sanctions on China over human-rights violations in the autonomous region of Xinjiang, acting alongside the United States, Canada, and the United Kingdom.

The problem is that the same bipartisan consensus in Congress regarding the Chinese challenge is matched by a bipartisan allergy to the sorts of multilateral and bilateral trade and investment deals required to address Beijing’s momentum.

Last November, China was one of fifteen Asia-Pacific countries, accounting for 30 percent of global gross domestic product, that signed the Regional Comprehensive Economic Partnership (RCEP). It was the first free-trade agreement between China and US allies Japan and South Korea, creating history’s largest trading bloc.

China has also expressed interest in joining the Comprehensive and Progressive Agreement for Trans-Pacific Partnership (CPTPP). That was the trade agreement signed by eleven countries after the Trump administration withdrew from the effort as one of its first acts of government.

Should the RCEP agreement go into force, which is likely before January 2022, and if China is able to join the CPTPP, the international-trade-deal game in Asia will be largely over—and China will have won.

What China’s forward march means for the future

At the same time, China is moving ahead on other fronts.

In January, it closed the EU-China Comprehensive Agreement on Investments (CAI), much to the consternation of incoming Biden administration officials. (Completion of that agreement has stalled in the European Parliament due to new Chinese sanctions on the EU.)

But whatever happens in Brussels, most European countries are eager to close trade and investment agreements with China, which last year for the first time became the EU’s largest trading partner.

The real problem lies with Washington’s lack of alternatives—driven by the mistaken narrative within both parties that globalization has worked against American interests and jobs.

As the Republican Party morphed into the Trump party, it abandoned the type of free-trade policies that former US President Ronald Reagan embraced as “one of the key factors behind our nation’s great prosperity.”

While Barack Obama negotiated the Trans-Pacific Partnership during his presidency, presidential candidate Hillary Clinton in 2016 opposed the agreement after having called it the “gold standard” only three years earlier.

“Both Democrats and Republicans are now advocating ‘a trade policy for the middle class,’” writes the Peterson Institute’s Adam Posen in a compelling Foreign Affairs narrative debunking this approach. “In practice, this seems to mean tariffs and ‘Buy American’ programs aimed at saving jobs from unfair foreign competition.”

Instead, he writes, “Washington should enter into agreements that increase competition in the United States and raise taxation, labor, and environmental standards. It is the self-deluding withdrawal from the international economy over the last 20 years that has failed American workers, not globalization itself.”

Instead, while the Biden administration has put its trade agenda on hold, China marches forward—closing the deals and setting the standards that will shape the future.

In Foreign Affairs, Adam Posen lays out a powerful argument that “any presidency that cares about the survival of American democracy, let alone social justice” must overcome a misguided US protectionist instinct among Democrats and Republicans alike.

He explains that many politicians in the United States have reached the flawed conclusion that free trade and globalization are responsible for economic hardship in the country. Rather, argues Posen, “it is the self-deluding withdrawal from the international economy over the last 20 years that has failed American workers, not globalization itself.”

Writes Posen, “What the U.S. economy needs now is greater exposure to pressure from abroad, not protectionist barriers or attempts to rescue specific industries in specific places.” Read More →

For those who believe a just peace can be reached with the Taliban in Afghanistan that would protect individual rights, particularly those of women, read this op-ed by a female, Afghan television journalist who has fled the country for her own safety in the wake of targeted assassinations.

“I know how the Taliban plan to shape the future of my country, and their vision of my country has no space for me…” she writes. “The Taliban see their Islamic government as duty bound to safeguard Muslim society from corruption and moral decadence, which they blame on the presence of women in public spaces, including universities and offices. They want to reduce us to bearing children.”

Writes Forotan, “As men continue to bicker over the future and control of Afghanistan, I have already lost my home and my country… I can’t shake off the despair and the sense that Afghanistan has been abandoned by the world,” writes Forotan. Read More →

This week the Atlantic Council, in partnership with the Rockefeller Brothers Fund, released a “Transatlantic charter on Afghan sovereignty, security, and development” aimed at ensuring that, despite US troop withdrawal in September, the country’s worst fears of civil war, failed democracy, and lost individual rights won’t be realized.

“The United States and its European allies still have a range of levers—diplomatic, financial, political and economic—at their disposal,” write the co-chairs in a letter. “What is urgently needed is a coordinated set of actions to mitigate the likely security and political consequences of the military withdrawal as part of a plan to advance stability and peace in Afghanistan.”

They write soberly, “An end to hardship and violence is not in sight. At the same time, we believe that state collapse and the loss of hard-won progress in so many areas of Afghan life are not inevitable.” The charter, which I have signed, outlines a responsible path forward, including a clearly stated and shared aspirational vision for the Afghan future. Read More →

Ed Caesar in The New Yorker weaves the remarkable tale of how North Korea’s “hacking army” has managed to pull off a series of impressive cybercrimes that have resulted in the accumulation of billions of dollars worth of stolen cash for Kim Jung Un’s authoritarian regime.

The author observes the irony that a country where only “a tiny fraction of one per cent of North Koreans has access to the Internet” hosts “some of the world’s most proficient hackers.” It’s “like Jamaica winning an Olympic gold in bobsledding—but the cyber threat from North Korea is real and growing,” he writes. Read More →

Pulitzer Prize-winning author Dan Yergin is at his best when he weaves historical context with futurist vision. He does that compellingly in his WSJ Review section cover story on the future of the car industry, or “AutoTech.” While he’s at it, he ponders whether the United States can keep up with China in this new race.

He reminds us that in 1900 there were more electric cars in New York than gasoline cars, but then Henry Ford’s Model T won the competition against Thomas Edison’s electrics. Now Yergin tracks “the merging of electric, autonomous vehicles with ride-hailing to create a radically different car economy. Tied together by the connectivity of digital networks, this new business could upend the global automobile industry—and along with it, the entire culture that for more than a century has been built around getting behind the steering wheel.” ​​​​​Read More →

Global Energy Center experts provide their analysis and takeaways in the wake of President Biden’s Leaders Summit on Climate.

Will events in Chad force a reset of Sahel strategy?

In the last week, several columns of rebel fighters have entered Chad from neighboring Libya with the intention of unseating long-time strongman and friend of the West Idriss Déby Itno, Chad’s ruler for the past thirty years. How France and the United States respond may cause repercussions for years to come.

Image: China's president, Xi Jinping, gives an online speech at the Boao Forum for Asia on April 20, 2021. Photo via Kyodo and Reuters.