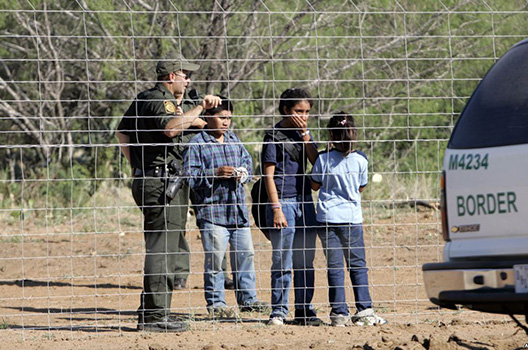 The United Sates is facing one of the greatest, if not the greatest, immigration crisis in the history of its southern border. An astouding 52,000 immigrant children had illegally crossed the US border at the end of May this year coming from countries in Central America, in their great majortity from Honduras, Guatemala and El Salvador.

According to official data, the number of unaccompanied minors fleeing to the United States from this region has more than doubled since 2011, and the number of illegal immigrants stands to grow up to 90,000 children by the end of this year. US policy, however, has been too caught up in addressing the superficial symptoms of the issue instead of focusing on the root causes of the problem.

In the face of the crisis, congress has been enveloped in ardent discussion as legislators scramble to agree on a solution to the mounting crisis. The debate has centered around the reformation of old immigration policy and around the President’s request of 3.7 billion dollars in funding to adress the crisis.

The relief plan itself, however, does little to confront the fundamental causes of the issue. Of the requested amount, 1.8 billion are earmarked for the Health and Human Services Department for immediate care of the immigrant children, and 1.5 billion would be destined for the Department of Homeland Security to strengthen security at the border. These measures, while necessary to some extent to address the immediate crisis, do nothing to address its underlying causes.

A measly 295 million of the requested budget is designated for the purposes of reintegrating deported immigrants to their home countries and as aid to Central American countries in combating poverty and violence. Even then,  this figure only stands if the plan is approved in its current form. Sectors of congress have lately advocated for the figure to be reduced in an increasingly partisan discussion that undoubtedly reflects an effort on the part of politicians to assert their individual stances in anticipation of the coming midterm elections.

The ongoing discussion thus almost completely ignores the issues of violence, poverty and corruption that afflict these children’s countries of origin and which are prompting families to send their children on a perilous escape journey away from home. “Parents don’t just make the decision to send their children on a potentially lethal journey,” pointed out Central American conflict expert Doug Farah in a recent event on the crisis at the Center for Strategic and International Studies (CSIS). Farah was emphatic in pointing out that the fact that families are actively choosing to have their children risk their lives to seek safe haven in other countries is evidence of the terrifying conditions these people face on their day to day lives.

With a recent worsening of gang violence in these countries largely due to territorial struggle over drug trafficking routes, families have had to increasingly deal with the forceful recruitment of their young children as gang members and as mules, coupled with the constant threat of rape and homicide. Honduras’ homicide rate, largely driven by gang violence, is the highest in the world, and sits at 90.4 killings for every 100,000 inhabitants. For comparison, Mexico has a murder rate of 21.5 per 100,000. The problem is further worsened by inneffective governments that have largely neglected their poorest citizens and are plagued by widespread corruption. Most of these countries’ poorest areas fail to see any positive state presence as the government refuses to invest in their development and scarcely have any police presence.

Under these circumstances, families are increasingly persuaded that risking a journey abroad is the best solution to give their children an opportunity at a normal life. In the meantime, as politics and the media portray the issue at the border as an immigration problem, the United States forgets there’s human side to this humanitarian crisis. Remembering the fact that the human beings at the border are victims of unimaginably unfavorable circumstances may help us decide to approach the problem in a way that truly addresses the roots of the issue and makes a lasting positive impact on those who currently decide abandoning their homes is their best bet at life.

Carlos Guzman is a Colombian native and a summer intern with the Adrienne Arsht Latin America Center.