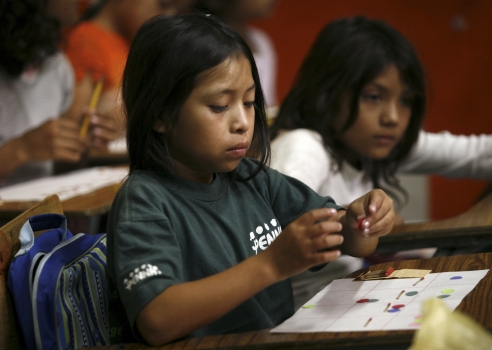 Twenty years ago, universal access to education was the major challenge in Latin American school system, according to Marcelo Cabrol, head of external relations at the Inter-American Development Bank (IDB), based in Washington, DC. “And it looks like we have done well in that regard, improving access in both primary and secondary education,” he says.

Cabrol was speaking at the launch of an exciting conversation with leading education entrepreneurs from the US and Latin America, held a few weeks ago in Washington. The event, hosted by the IDB, brought together over fifty like minded individuals working on innovation, entrepreneurship, and technology at a global, regional, and national scale.

Beginning from the premise that access has improved, however, the discussion then turned to the pressing issue: that in terms of improving quality, the education debate has largely stagnated in recent years. Quality has failed to improve despite growing financial investments in education in both absolute terms and relative to GDP.

“There is a need to start discussing terms like ‘leapfrogging,’ to be able to move faster in providing better quality to all students,” argued Antonio Caparrós, manager of Fundacion INICIA, a social investment fund based in the Domincan Republic. “We need to introduce innovation to the system, the education debate needs to focus more on terms like productivity, competitiveness, assessments and benchmarks.”

Such a gathering of several dozen entrepreneurs all working in the education reform space in Latin America is an innovation in and of itself. A decade ago, this type of community didn’t exist – the few private companies and ventures where text-book publishers. And the region’s education conferences would convene government officials and academic experts, but not the private sector or other types of new players.

Cristina Pombo, a leader of innovation strategy at the IDB, was one of the central forces in developing the concept and working to convene the group. “The event was intended to work as a catalyst of new ideas and new players,” she says. But she recognizes that such an event, while motivating, is only the beginning. “The challenge will be to keep consistently organizing, and continuing to generate dialogue between the private and the public sectors.”

Cabrol is optimistic, given the pace of change that he has already witnessed. Just a few decades ago, “traditional methods for delivering education were king, and very few innovations existed,” he recounts. “I could count them on one hand – the Escuela Nueva (New School) in Colombia, Fe y Alegria (Faith and Joy) private schools, the subsidized schools in Chile. And that’s about it.”

Fast forward twenty years, and there are new models surging in every country in the region – mostly private sector, including both for profit and non-profit organizations. For example Utel, an online university in Mexico founded by David Stofenmacker; julioprofe.net a digital content website founded by a teacher in Medellin, Colombia, Lumni, a social investment firm offering financing to students who need resources to complete college, founded by Felipe Vergara, and several investors in this sector like Luis Enrique Garcia, from Appian Venture in Colombia, Mark Grovic from New Markets in the US, and Sergio Abramowitz from Debry.

Even given this sea change, the workshop identified a number of areas where improvement will be key for the future of education in Latin America. Participants focused on how to transmit next generation skills, the technological platforms needed to bring new teaching tools to the classroom, the best methods to foster innovation, and to scale up successful local models. The impact of cutting edge neuroscience on our understanding of how we learn was also a fascinating topic of discussion, along with the practical application of this knowledge on classroom pedagogy and teacher training.

All of the participants agreed that teacher quality was the central issue that impacts all of the rest. Brazil’s Rafael Parente summed up the group’s conclusions, arguing that “we don’t do enough to involve teachers from the very beginning.”

There is much debate over the skills students need – the so-called 21st Century skills that combine technological prowess with creativity and leadership capabilities. But there is less discussion about how to recruit and train teachers that are capable of transmitting such skills, or who possess them themselves. Online learning might be able to produce excellent content, streamline teaching processes, and reduce costs overall, but by itself it won’t be enough to teach “soft” skills like teamwork, curiosity, persistence, and tolerance of other cultures.

Improving the quality of Latin American education will depend on bringing innovation into the sector, through the participation of the private sector, which has always been out front in developing new processes, tools, and systems. Encouraging a robust community of entrepreneurs to get more involved in the issue will bring compounding benefits  and dynamic events like the one hosted by the IDB was an excellent start.