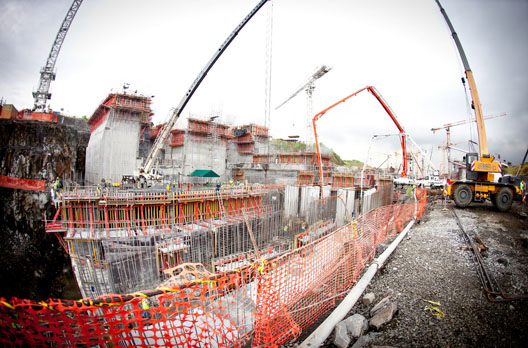 There is no doubt that next week’s World Economic Forum in Panama (April 1-3) takes place at a pivotal moment in the region’s economic integration, but its location carries a symbolism that should resonate across Latin America. The year 2014 marks the centennial celebration of the opening of the Panama Canal, a vital infrastructural advancement that, one hundred years later, makes Central America an incomparable catalyst for international trade. At this crossroads in the region’s history and as it ascends to greater prominence on the world stage, stakeholders in Latin America need to recognize that sustained economic growth and physical infrastructure investment go hand in hand. The Panama Canal’s legacy and its continued relevance should be a call to action for more investment in infrastructure.

Latin American countries boast of their up-and-coming economic capabilities, yet they rank near the bottom among emerging markets for quality infrastructure, a severe handicap to regional economic integration. The ramifications of this situation are debilitating: both retailers and manufacturing companies hold inventories nearly twice as long as similar businesses in the United States. Latin America is at the middle of an historic moment in commercial supply chain reconsideration. As manufacturers reexamine offshore sourcing models that rely mainly on the Asia-Pacific region, they see countries in Central and South America as prime opportunities to expand supply chain cohesion, especially with the presence of favorable trade policies, abundant natural resources, a growing middle class, and, of course, the region’s accessibility to North America. These factors prime the pump for continued growth, but without transport systems that can handle integrated trade, the Latin American carburetor will fail to ignite.

Thought leaders need to look no further than Panama for a country that has taken several positive steps to integrate its physical infrastructure for maximum supply chain capacity. Of course we must acknowledge that Panama is supremely predisposed as both a conduit between North and South America and between the world’s two largest oceans – equipped with an extraordinary manmade waterway. These existing assets, however, do not diminish Panama’s progress in developing new infrastructure. Tocumen International Airport and the Colón Free Zone accompany the canal as major mechanisms for synchronized supply chain enhancement. The Panama Canal Expansion Project, on track for completion by 2015, promises to make the region an even greater trade hub by increasing container vessel capacity and welcoming additional maritime traffic.

We should not ignore that there are encouraging signs for investment in Latin American infrastructure, but if the region will continue to compete globally, there needs to be more intelligent commercial facility. Private equity firms made 2013 a banner year for infrastructure investment, pummeling more than $3.5 billion into energy, telecom, and supply chain ventures, a figure that more than doubled the amount in 2012. Governments are looking to smart public-private partnerships to reduce inadequacies in the trade dynamic. Reform of the energy and telecom sectors in Mexico, in particular, promises new avenues for investment. It is up to political leaders to work effectively with private companies: Brazilian President Dilma Rousseff’s largely unsuccessful attempts to garner bids from investors last year showed that, even with concessions and opportunity, private companies will be reticent to work with governments who exhibit signs of extremely mismanaged intervention into infrastructure projects.

Participants in the World Economic Forum on Latin America have the task of shaking up the region’s stagnant infrastructure narrative. We can hope that next week’s meeting in Panama will produce ideas that both governments and companies can use to effectively plan a new era for transportation development. The burden is great upon the architects of policy as well as those who are fated to implement it. But the risk is far greater: let us not make the Panama Canal the last great infrastructural achievement in Latin America.