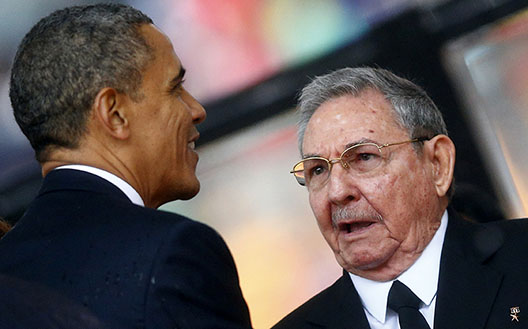 In 2009, President Obama began relaxing tough sanctions on Cuba, expanding the free flow of people and remittances and planting the seeds of a new paradigm for U.S.-Cuba relations – one that looks beyond the outdated Cold War-era approach that has been employed for so long.

The Atlantic Council’s new poll reflects broad national support for normalization of relations with Cuba, especially for the sorts of incremental changes the President can make unilaterally. These results should give further momentum to President Obama’s initial steps to update U.S. policy on Cuba.

There are a number of steps this Administration can take to advance this policy and expand contact with the Cuban people:

Provide direct assistance to Cuba’s burgeoning small and medium enterprises. Since 2011, the Cuban government has enacted a series of pragmatic reforms to update the Cuban economic model, including creating space for private enterprise. As a result, 450,000 entrepreneurs have established small businesses under these new rules, making up an emerging Cuban middle class. President Obama can support this positive change by permitting any U.S. commercial or economic activity that would provide direct services, donations and goods to Cubans authorized to open private enterprises in certain authorized categories (including construction and remodeling, real estate, food and beverage, room rentals, to name a few). These entrepreneurs are key to the future of Cuba’s political economy.

Authorize further relaxation of trade and financial policy. The President can further facilitate support to the Cuban people (especially entrepreneurs) by lifting the cap on cash and gifts that non-Cuban-Americans can send to the island, eliminating the daily expenditure cap for U.S. citizens visiting Cuba and removing the prohibition on the use of U.S. credit and bank cards in Cuba.

Remove Cuba from the list of state sponsors of terrorism. Cuba was added to the list in 1982 in response to support it provided to Latin American insurgencies, including Colombia’s FARC. But now, Cuba plays a key role in facilitating the Colombian peace talks with the FARC and it has distanced itself from ETA members living on the island. Tellingly, the State Department’s 2013 review states “there was no indication that the Cuban government provided weapons or paramilitary training to terrorist groups” and high-level U.S. diplomats no longer feel the designation is justified. The President should signal his intention to remove Cuba from the list in the context of direct talks on other measures needed to improve U.S.-Cuban relations.

Expand ongoing cooperation on issues of mutual concern. Last month, U.S. and Cuban officials met in Havana to continue discussions on migration, an important building block toward future normalization of relations. The President should build on this success by appointing a special envoy to lead similar dialogues on travel, counterterrorism and counternarcotics, the environment, and trade and investment.

Normalizing relations with Cuba along these lines would give American and Cuban citizens the freedom to engage in direct diplomacy and support the Cuban people in their desire to participate in and benefit from the updating of the Cuban model.

Image: President Barack Obama shook the hand of Cuban President Raul Castro at the memorial service for late South African President Nelson Mandela, a rare gesture between the leaders of two nations which have been at odds for more than half a century. REUTERS/Kai Pfaffenbach