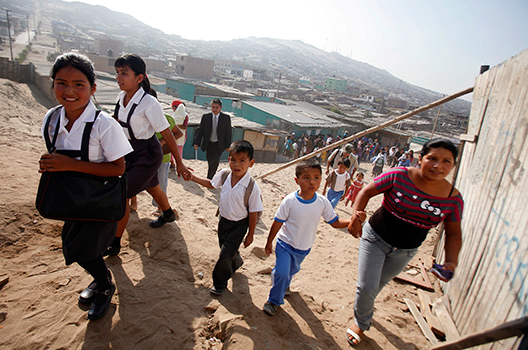 Despite the economic troubles that have upended many of the world’s developing countries in the past decade, foreign development aid is on the rise. The OECD estimates that in 2013, aid from Development Assistance Countries rose 6.1 percent to reach an all time high.

However, one aspect that continues to get short shrift is education. As the Guardian points out, disbursed aid levels for education in developing countries are barely reaching one-third of what governments have committed to.

While the money is not there, the challenge is still huge. As the joint UNESCO/UNICEF report, A Framework for Business Engagement in Education, points out, just “$1.9 billion were contributed in 2011 by donors to basic education, despite a financing gap of $26 billion per year to achieve basic education in low-income countries.” And even this number simply refers to school access, rather than ensuring the quality of the learning that takes place in the classroom.

It looks like funding for education aid is always going to be a source of controversy. One reason is the inherent difficulty in assigning a dollar amount to the cost of providing a quality education to each student. A second major reason relates to a fundamental disagreement over how aid should be delivered. Education financing usually means injections of money into local governments, which is criticized by many reformers who argue that governments don’t actually need more money but rather new ways to provide education. That is, what is needed is innovation, not cash.

Thus, many reform advocates only believe in more funding if that money is channeled through new, independent initiatives, which face their own challenges. An inverse dynamic is at play with think tanks and multilateral organizations, who support more funding on the condition that it go through their established pathways, usually, again, straight to governments. This causes a fundamental tension among reformers.

It is in emerging economies where the challenge of quality education is the greatest. As the same UNESCO/UNICEF report states:

The population of 15 to 24 years olds is now over one billion in the developing world, roughly one-sixth of the world’s population… we face a reality of the largest populations in history without the skills knowledge or attitudes to engage positively in society.

Amie Patel, currently a Director at Imprint Capital Advisers, and previously an Investment Officer at the Soros Economic Development Fund, spoke recently at Brookings conference “New Ideas to Scale Up and Finance Global Education,” arguing in favor of a non-traditional financing mechanism known as social impact bonds (SIBs). With SIBs, “private capital is raised for public ends, with repayment based on outcomes.”

As Patel mentions, it is clear that we need avenues outside of government to help scale up funding for education. Not only are governments budget-restricted, but it is far from clear they will be effective with more money. The key is to rethink how government and outside actors can better coordinate efforts, with each playing to their strengths. This is what UN Secretary-General Ban Ki-moon is getting at when he says that “we need more companies to think about how their business policies and practices can impact education priorities. [They] understand investment. [They] focus on the bottom-line. [They] know the dividends of education.”

We have seen that when the private sector does get involved, there are many ways to scale up funding. There are for-profit innovators like Shannon May, a co-founder of the Bridge International Academies, who leverage a large network of standardized schools to lower per-pupil costs, and have created the largest chain of private schools in Africa.

There are also nonprofit groups like the NewSchools Venture Fund, which began with charters and now invests in a variety of education groups, businesses and technologies. New Schools has financed a number of well-known charter management organizations (CMOs): Aspire Public Schools, Rocketship Education, KIPP and Khan Academy. As of 2013, the fund had invested about $260 million since its creation in 1998, with donations from the Broad Foundation, the Bill & Melinda Gates Foundation and the Walton Foundation.

And while many have concerns about the role of for-profit investment in education, former NewSchools CEO and now Obama administration nominee for Under Secretary of Education Ted Mitchell has argued in the New York Times that “for-profit entities have just as much capacity [to better the education system and help poor students] as not-for-profits, and they ought to take a run at it.” Even if it is not always easy to find consensus on methods, it should also be very clear that new options must be found — and the private sector should be among those leading the charge.

Image: Mothers bring their children to school on the first week of the academic year in Pachacutec shanty town northern Lima March 1, 2012. More than a million students returned to school on Wednesday for the new academic year. REUTERS/Enrique Castro-Mendivil