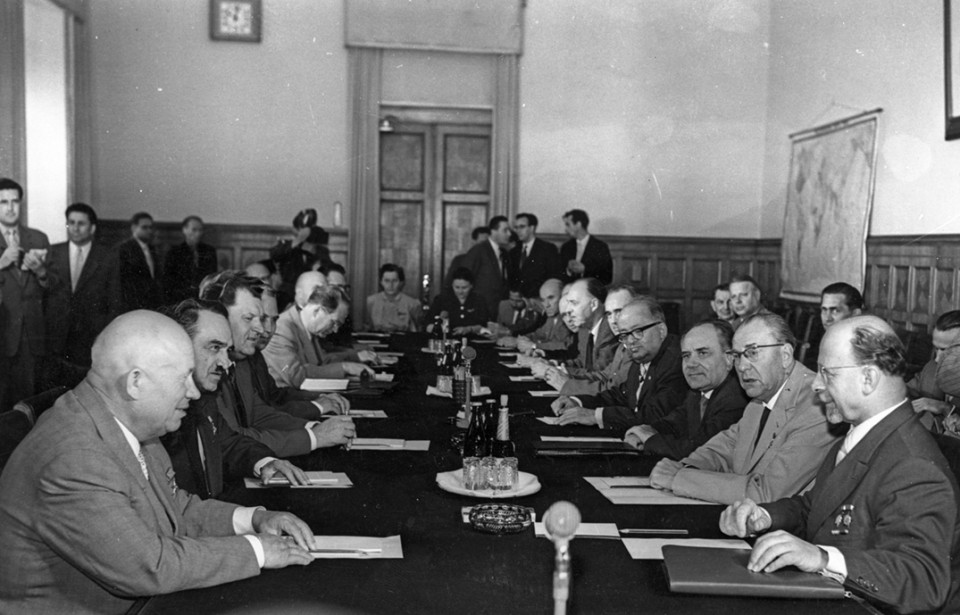 “The Great Man Theory,” first developed by the Scottish writer Thomas Carlyle in the 19th Century, argues that history can be largely explained by the influence of towering historical figures from Shakespeare to Attila the Hun. Its detractors contend that the societal forces and trends which produce these people are more decisive.

It wasn’t the purpose of BERLIN 1961 to settle that dispute, but four primary protagonists and their colliding ambitions drove the narrative. Their societies and systems may have produced them, but it was their individual decisions and motivations that determined events.

Hollywood could not have produced more compelling or contrasting characters:

•    President John F. Kennedy was the 43-year-old son of privilege, brilliant  and determined to be a great historical figure like Abraham Lincoln and Franklin Roosevelt. Yet he was fearful they had made history through wars, and in the 1960s that could mean nuclear holocaust. Handsome and charming, he seemed the picture of health, yet he was taking frequent medication, including amphetamines, to treat everything from adrenal insufficiency to chronic back pain.

•    The 67-year-old grandson of a serf and son of a coal miner, Soviet premier Nikita Khrushchev’s primary concern, with his 22nd Communist Party Congress, approaching in October was political survival. By temperament and upbringing, he was Kennedy’s opposite: impulsive when Kennedy was indecisive, bombastic when Kennedy was measured. His instincts were to peacefully co-exist with his American adversary, but growing political threats from Stalinist remnants and the Chinese pushed him toward confrontation.

•    At age 67, East German leader Walter Ulbricht was the tail that was wagging the Soviet bear. He was a cold, introverted workaholic who had placed the guardrails of a Stalinist system around a German people who he fundamentally distrusted following World War II. An organizational zealot, his life’s work was East Germany and he saw it endangered by Khrushchev’s reluctance to close its border. His leverage with Khrushchev grew in rough proportion to his country’s refugee bleed.

•    Chancellor Konrad Adenauer, at age 85 was in his fourth term as West Germany’s first and only chancellor, an eccentric, shrewd and orderly man who had survived all the chaotic stages of Germany’s previous century. He also distrusted his fellow Germans, but his solution was to integrate them irrevocably in the West. He was a man of contradictions: a buttoned-down man who sang German drinking songs, a proper Catholic like Churchill who napped naked at midday, and a fierce anti-communist who ran his country with authoritarian fervor.  His chief worry: that the naïve, young Kennedy lacked the mettle to face down  the Soviets and thus endangered the country he had built.

Lesser roles provide the texture for the plot and influence the outcome. My personal favorite was Georgi Bolshakov, the gregarious Soviet military intelligence agent, who created a perilous, secret conduit between Kennedy and Khrushchev with the president’s brother Bobby. A close second is Dean Acheson, President Truman’s dapper former Secretary of State, who Kennedy brings into his administration to give him hard-line advice on Berlin and NATO.

And then there are the walk-ons, among them the 3.2 million Berliners who by a quirk of history had ended up on different sides of the Cold War’s front lines: spies, students, lovers, workers.

“The Great Man Theory” says it is the most determined of players who write history, and by that measure Walter Ulbricht was successful in getting what he wanted. Yet those who question that approach were also right. The Wall in the end could not save East Germany or the Soviet Union, but rather only extend their lives.

Fred Kempe is president and CEO of the Atlantic Council. His latest book, Berlin 1961, will be available May 10. This blog series originally published by Reuters. Photo: Nikita Khrushchev (left) and Walter Ulbricht (right) at the Kremlin during a meeting between leaders of the USSR and GDR on June 9, 1959.