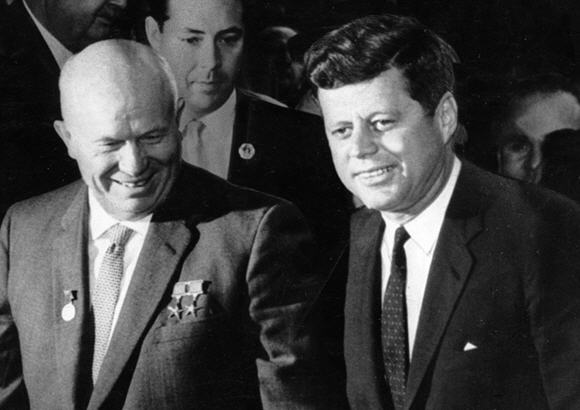 Historians haven’t done well over the years in answering an awkward question: when do the personal quirks and unusual habits of American presidents have historic consequences? Tabloid reporters salivate over salacious stories such as Monica Lewinsky’s affair with President Bill Clinton, but when do these become matters of state?

My book Berlin 1961 steered away from the most sensational accounts and speculations regarding President John F. Kennedy’s womanizing and health problems. However, I did want to know whether any of these had substantive impact that such a book should record.
The time when that seemed most likely was in June 1961 during President Kennedy’s trip to Europe to see Soviet leader Nikita Khrushchev. What concerned me the most were the secret, excessive and perhaps irresponsible ministrations of a physician named Max Jacobson – better known as “Dr. Feelgood” by celebrity patients such as Tennessee Williams and Truman Capote – which were laced with amphetamines.
For all the adoring French crowds, grand Gallic meals, and media hype generated by a thousand correspondents covering his first stop in Europe to see French leader Charles de Gaulle in Paris, President Kennedy’s favorite moments were spent submerged in a giant, gold-plated bathtub in the “King’s Chamber” of a nineteenth-century palace on the Quai d’Orsay.
Behind all that the French theater – and ahead of the President’s next stop in Vienna with Soviet leader Nikita Khrushchev – lay a U.S. president who was entering the most important week of his presidency as a weary and wounded commander in chief. He was inadequately prepared and insufficiently fit for what would face him in Vienna.
Khrushchev would be scanning for Kennedy’s vulnerabilities after the Bay of Pigs, and there were plenty. At home, Kennedy was facing violent racial confrontations that had broken out in the American South as African Americans grew more determined to end two centuries of oppression. The immediate problem revolved around the “Freedom Riders,” whose efforts to desegregate interstate transportation had won only tepid support from President Kennedy – and were opposed by nearly two-third of Americans.
Abroad, Kennedy’s failure in Cuba, unresolved conflict in Laos, and tensions building around Berlin made his Paris-Vienna trip all the more fraught with risk. It seemed just another of his presidency’s early misfortunes that Kennedy had seriously reinjured his back muscles while planting a ceremonial tree in Ottawa, and the pain had grown worse on the long flight to Europe. It had been the first time since his spinal fusion surgery in 1954 that he was hobbling around on crutches – though only in private.
Kennedy’s personal physician, Janet Travell, who accompanied him in Paris, was concerned about his heightened suffering and the impact his treatments might have on everything from mood to endurance during the trip.  Years later, Travell would recall that Paris was the beginning of “a very hard period.” She  would give Kennedy two to three shots a day of procaine, a potent cousin of Novocain. She was also treating him for chronic adrenal ailments, high fevers, elevated cholesterol levels, sleeplessness, and stomach, colon and prostate problems.
Travel kept an ongoing “Medicine Administration Record” to track the cocktail of pills and shots she provided Kennedy. What she couldn’t log, however, were the more unconventional administrations of Max Jacobson, or “Dr. Feelgood,” who had travelled more secretly to Paris and Vienna.
Kennedy had been so pleased with Jacobson’s remedies during his campaign that he recommended them as well for his wife Jacqueline after the difficult November delivery of their son John-John – and again to boost her stamina before the Paris trip.  It would later be discovered that his injections  contained hormones, animal organ cells, steroids, vitamins, enzymes and – most troubling – the amphetamines to combat fatigue and depression.
The potential national security consequences of this concoction were considerable coming just before his crucial meeting with Khrushchev. The potential side effects included hyperactivity, hypertension, impaired judgment and nervousness. Between doses, his moods could swing from overconfidence to bouts of depression.
History would never record how this medication influenced President Kennedy’s performance in Vienna. Though by Kennedy’s own later account, he was about to confront two of the worst days of his life – days that he feared might convince Khrushchev of his weakness and prompt him to test U.S. resolve in Berlin in a manner that could lead to war.
Fred Kempe is president and CEO of the Atlantic Council. His latest book, Berlin 1961, was published May 10. This blog series originally published by Reuters.