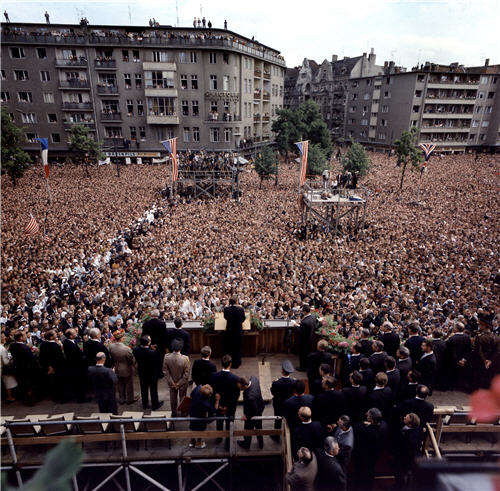 A year after President John F. Kennedy acquiesced to the communist construction of the Berlin Wall, two dramas occurring five thousand miles apart illustrated the high cost of one of the worst inaugural year performances of any modern president.

The first unfolded under the spotlight of a Berlin summer sun, when eighteen-year-old bricklayer Peter Fechter and a friend began their sprint to toward freedom across the so-called death strip, the no-man’s land that lay before the Wall. Two bullets pierced Fechter’s back and stomach as he watched his more agile friend leap to freedom over strands of barbed wire that adorned the barrier’s crown. Fechter collapsed backwards in a quivering heap at the base of the wall, where he bled through multiple wounds while U.S. soldiers watched helplessly, obeying orders not to assist any escapees until they had left East Berlin territory.

At about the same time and more than an ocean away, Soviet ships had begun landing secretly at eleven different Cuban ports with combat forces and the components for some twenty-four medium-range and sixteen longer-range launchers, each of which would be equipped with a nuclear warhead and two ballistic missiles. Once they were installed, the Soviet Union for the first time would have a reliable capability to hit New York and Washington, D.C. in a nuclear exchange.

On first reflection, there would seem to be little to connect the East German killing of a teenage bricklayer and the Soviet clandestine landing in Cuba. Yet, taken together, they dramatically symbolized the two most significant aftershocks of President Kennedy’s mishandling of the events surrounding Berlin in 1961:

The world now knows what President Kennedy did not envision at the time: that the Berlin Wall would fall in November, 1989, that Germany and Berlin would be unified a year later in October 1990, and that the Soviet Union itself would collapse a year after that, at the end of 1991. Given the Cold War’s happy ending, it has been tempting for historians to give Kennedy more credit than he deserves for that outcome.  By avoiding undue risk to stop the Berlin Wall’s construction, their argument goes, Kennedy prevented war and set the stage for Germany’s eventual unification, for the liberation of the Soviet bloc’s captive nations, and for the enlargement of a free and democratic  Europe.

However, the record – informed by the new evidence in Berlin 1961 and a closer examination of existing accounts and documents – demands a less generous judgment. Perhaps the best judge of Kennedy’s poor showing in 1961 was the president himself. When, on September 22 – more than a month after the border closure – Detroit News journalist Elie Abel sought Kennedy’s cooperation for a book he wished to write on his first year in office, the president responded, “Why would anyone want to write about an administration that has nothing to show for itself but a string of disasters?”  He anticipated that Khrushchev would test him further following his performance at the Bay of Pigs in April, the Vienna Summit in June and during the construction of the Berlin Wall in August.

Kennedy ultimately changed history’s narrative through his response to the Cuban Missile Crisis in October 1962, more than a year after the Berlin border closure. Then on the first and last trip of his presidency to Berlin on June 27, 1963, he delivered one of the most memorable speeches of his presidency – man lines added to the draft as he experienced the delirious crowd during his drive through the western part of the divided city.

Kennedy spoke for the first time during his presidency of the right to reunification that Germans had earned through their eighteen years of good behavior after World War II. He spoke of his faith that Berlin, the German nation and the European continent would someday be unified.  In one of the most powerful speeches of his presidency, Kennedy expressed all the outrage he had not shown during the border closure a little less than two years earlier:

At that point, Kennedy threw in a German line that had not appeared in his original text, but one that he had practiced before the event with Robert Lochner, the head of Radio in the American Sector of Berlin, or RIAS, and Chancellor Conrad Adenauer’s interpreter Heinz Weber. “All free men, wherever they may live,” he said, “are citizens of Berlin and, therefore, as a free man, I take pride in the words, “Ich bin ein Berliner.”

Or as Kennedy had written phonetically on an index card, “Ish bin ine Bear-LEAN-er.”

Years later, amateur linguists would argue that Kennedy had misspoken and by using the article ein in front of Berliner, which was the name of a German pastry, had actually told the crowd, “I am a jelly doughnut.” Yet the president had discussed just that point with his two tutors, who had rightly concluded that by leaving out the article he would be suggesting he was born in Berlin and perhaps confuse the crowd, and thus lose the emphasis of his symbolic point. In any case, no one among the delirious Berliners had any doubt about Kennedy’s meaning.

Less than five months later, on November 22, 1963, an assassin’s shot would kill President Kennedy. Less than a year after that, on October 14, 1964, fellow communists would oust Soviet leader Nikita Khrushchev.  But during the Berlin crisis of 1961, their fates were cast in a city whose name would come to embody the central ideological and geopolitical struggle of the twentieth century’s second half. Ultimately, the story would end well, but only because in Cuba Kennedy would reverse the perilous course he had set the previous year in Berlin.

Fred Kempe is president and CEO of the Atlantic Council. His latest book, the New York Times bestseller Berlin 1961, was published May 10. This blog series originally published by Reuters.