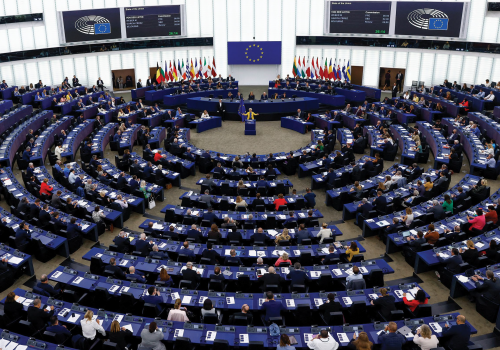 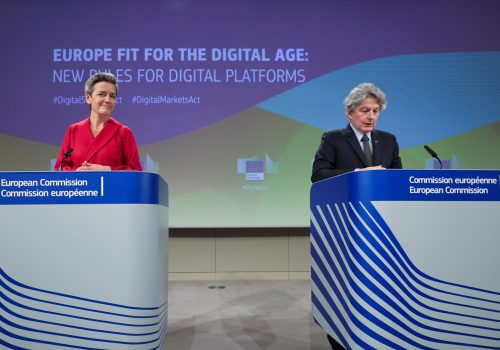 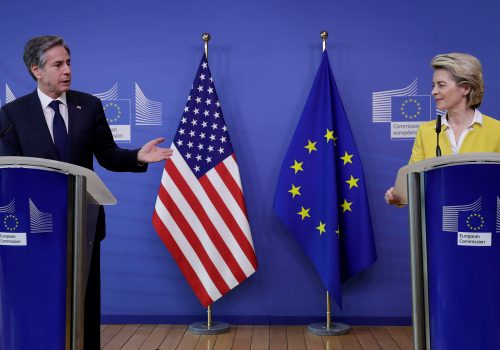 Proposal for a US-EU Digital Council: Building a comprehensive conversation

As the new Biden administration confronts its foreign policy priorities, it should not avoid the looming digital debate with its European allies. With the European Union serving as the leader in digital regulation, policy on the digital space is by no means aligned between US and European policymakers. From digital taxation to data storage and privacy rights, issues that will define the success or failure of transatlantic digital policy—with hundreds of billions of dollars on the line—remain unsettled.

Biden's executive order is the next step toward establishing a new EU-US Data Privacy Framework; but will the new agreement be viable? Our experts break down the details.

#AtlanticDebrief – What is the State of the European Union? | A Debrief from Frances Burwell

Experts across the Atlantic Council network weigh in on the queen's seventy-year reign, her importance to the transatlantic relationship, and more.

Frances G. Burwell is a distinguished fellow at the Atlantic Council and a senior director at McLarty Associates. Until January 2017, she served as vice president, European Union and Special Initiatives, at the Council. She has served as director of the Council’s Program on Transatlantic Relations, and as interim director of the Global Business and Economics Program, and currently directs the Transatlantic Digital Marketplace Initiative. Her work focuses on the European Union and US-EU relations as well as a range of transatlantic economic, political, and defense issues. She is a member of the Advisory Board of Allied for Startups.

Her most recent report is Digital sovereignty in practice: The EU’s push to shape the new global economy. Her other publications are Engaging Europe: A Transatlantic Digital Agenda for the Biden Administration; The European Union and the Search for Digital Sovereignty: Building “Fortress Europe” or Preparing for a New World? (co-authored); Making America First in the Digital Economy: The Case for Engaging Europe (2018); After Brexit: Alternate Forms of Brexit and their Implications (co-authored); Europe in 2022: Alternative Futures (co-authored with Mathew Burrows); A Transatlantic Approach to Europe’s East: Relaunching the Eastern Partnership; Shoulder to Shoulder: Forging a Strategic US-EU Partnership; Rethinking the Russia Reset; and Transatlantic Leadership for a New Global Economy. She is also a frequent commentator on European politics and transatlantic relations, with interviews and op-eds appearing in the Huffington Post, Handelsblatt Global Edition, Financial Times, al-Jazeera, BBC, National Public Radio, CNBC, CCTV, among others.