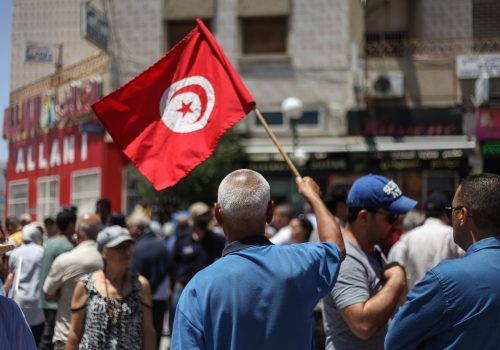 The impact of COVID-19 on either shore of the Mediterranean

This report draws on case studies of Libya, Tunisia, Egypt, Algeria, and migration to the EU to illuminate the key challenges faced in the Mediterranean community, and warns of the undesirable outcomes ahead if international inaction toward the region persists.

Ben Mahfoudh in JCL-MENA: “The President of the Republic of Tunisia: Commander-in-Chief of all the armed forces or only the military forces?”

Ben Mahfoudh in JCL-MENA: “Tunisia: between calls for dialogue and the politics of denial”

Dr. Haykel Ben Mahfoudh is a nonresident senior fellow with the Atlantic Council’s Middle East Programs. Dr. Mahfoudh is the director of the Center for Research in International and European Law and Maghreb-Europe Relations, a position he has held since 2013. He has been a member of the Scientific Board at the University of Carthage in Tunisia since 2014. From 2006 to 2009, he taught Constitutional Law, Administrative Law, International Law, and Human Rights Law at University of El Manar in Tunisia.

Dr. Mahfoudh is a founding partner Ben Mahfoudh & Co. Law Firm, where he worked from 1996 to 2011. Dr. Mahfoudh has been an Associate Expert the National Defense University’s Near East South Asia Center for Strategic Studies since 2002 and has partnered with NATO in 2007 and 2018 on the topics of transparency and security in Tunisia. Dr. Mahfoudh has expertise in security sector reform programs, international development, constitution-building, and civil society. He previously contributed to the Atlantic Council as a nonresident fellow from 2014 to 2017.

Dr. Mahfoudh received a L.L.M. in Law in 1993, a L.L.B. in Economic and Social Law in 1993, a Master’s in Public and Finance Law in 1995, and a Ph.D. in International Humanitarian Law in 2005 all from the University of Carthage in Tunisia. He is the author of three books published between 2010 and 2016 as well as many academic and other publications in English and French. He has lectured in the United States and Europe, including at NATO. Dr. Mahfoudh speaks Arabic, English, and French.