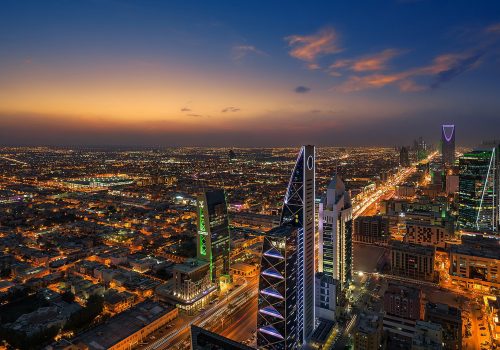 Executive summary When global oil prices collapsed in summer 2014, Saudi Arabia confronted one of the most daunting economic challenges of its modern history. Upon ascending to the throne the following year, King Salman bin Abdulaziz Al Saud and his son Mohammed bin Salman Al Saud (now the crown prince) responded by developing an ambitious […] 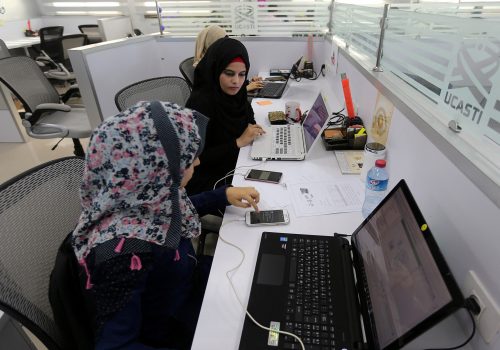 The final report of Middle East Strategy Task Force Co-Chairs Madeleine K. Albright and Stephen J. Hadley proposes nothing short of a paradigm shift in how the international community and the Middle East interact.

Grand in American Purpose: Picking Up The Pieces

In the News by Stephen Grand,

Grand in American Purpose: Picking Up The Pieces

Executive summary When global oil prices collapsed in summer 2014, Saudi Arabia confronted one of the most daunting economic challenges of its modern history. Upon ascending to the throne the following year, King Salman bin Abdulaziz Al Saud and his son Mohammed bin Salman Al Saud (now the crown prince) responded by developing an ambitious […]

Tensions mount in Syria after strike on Turkish troops

Atlantic Council experts respond to the airstrikes against Turkish soldiers in Idlib, as Russia and the Assad regime continue their collision course with Turkey in Syria.

Stephen Grand is a nonresident senior fellow with the Council’s Middle East Programs. He previously led the Middle East Strategy Task Force at the Atlantic Council’s Rafik Hariri Center for the Middle East. Concurrently, he is the executive director of the Network for Dialogue, a joint initiative of the Istituto Afari Internazionali (an Italian foreign policy institute) and PAX (a Dutch peacebuilding organization).

Previously, he was a visiting professor at Utrecht University, the Vrije Universiteit in Amsterdam, and Erasmus University in Rotterdam. Grand was also a nonresident senior fellow at the Project on US Relations with the Islamic World (housed within the Center for Middle East Policy at Brookings), where he served as director from 2006 to 2013. He is the author of the book Understanding Tahrir Square: What Transitions Elsewhere Can Teach Us about the Prospects for Arab Democracy (Brookings Institution Press, 2014). He serves on the board of the Project on Middle East Democracy and Foreign Policy for America, and is a member of the International Advisory Council of the Vaclav Havel Library Foundation.

From 2004 to 2006, Grand was director of the Aspen Institute’s Middle East Strategy Group. He has also served as an adjunct professor at American University’s School of International Service and Syracuse University’s Maxwell School of Citizenship and Public Affairs. From 2002 to 2003, he was an international affairs fellow at the Council on Foreign Relations. He has also been a term member of the Council on Foreign Relations and a Henry Crown Fellow with the Aspen Institute. Prior to June 2002, Grand served as director of programs at the German Marshall Fund (GMF) of the United States. Before joining GMF in 1997, he was a professional staffer on the Senate Foreign Relations Committee, covering Europe. In 1994, he was a visiting researcher at Charles University’s Center for Economics and Graduate Education in Prague. Grand earned a PhD from the department of government at Harvard University and a BA in political science from the government honors program at the University of Virginia, where he was a Jefferson Scholar.