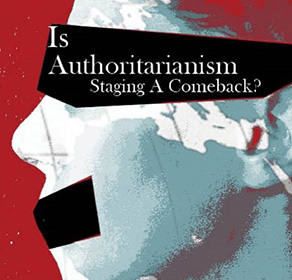 About the Book:
The world is in the throes of a nearly decade-long global democratic recession. Democratic breakdowns in strategically important countries like Russia, Pakistan, Egypt, and Venezuela are cause for serious concern, as are reversals in Turkey and Hungary. Using a combination of repression and noncoercive tools, governments are shutting down space for civil society around the world. Is Authoritarianism Staging A Comeback? offers answers to why authoritarianism is gaining on democracy—and what the international community can do about it.

The book features essays by prominent democracy scholars and activists at leading universities, think tanks, and nongovernmental organizations. The editors—Mathew Burrows and Maria J. Stephan—are leading the Future of Authoritarianism project at the Atlantic Council on how external actors can reverse authoritarianism’s recent gains by boosting democracy’s prospects. Is Authoritarianism Staging A Comeback? is the first fruit of that effort.

Positive Reviews:
“The setbacks to democracy we are witnessing around the world are alarming, inherently destabilizing, and need to be reversed. Burrows and Stephan provide a useful look at the political, economic, security, and technology aspects of authoritarian resilience. These compelling case studies of civil resistance and authoritarian responses suggest the legal and policy tools available to policymakers to support locally-driven democratic change. National and international security strategists should take note.”
–Admiral James Stavridis USN (Ret.), Former Supreme Allied Commander of NATO

“The advance of freedom globally is among the most important factors for ensuring US long-term national security interests. Understanding why authoritarianism is gaining ground while some democracies are backsliding is one of the most urgent policy priorities. The contributors to this volume make a convincing case that the United States and other democratic governments need to develop a strategy for re-energizing our collective efforts to support democratic movements worldwide and make some useful suggestions on where to start.”

“Burrows and Stephan make a compelling case that complacency has no place in the face of rising authoritarianism and point to powerful nonviolent tools for combating this trend. Their manifesto builds on my late husband Ambassador Mark Palmer’s conviction that free societies have the means at their disposal to end dictatorships. In Mark’s words, ‘Working together, there is nothing that can stop the world’s democracies and democrats from achieving universal freedom.'”
–Dr. Sushma Palmer, Chairman, Center for Communications, Health and the Environment

“This excellent volume well analyzes one of the most troubling international developments today, mounting global reversals of democratic governance, and how to combat effectively this trend. It is a valuable resource and must read for both policymakers and civil society activists alike.”