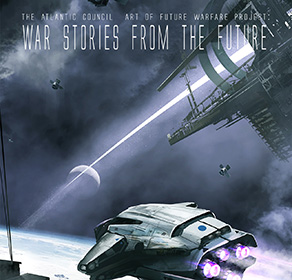 “The authors in this anthology invite us to shed the shackles that bind us to our current constructs and instead imagine things as they might be, for better or for worse.”
– Martin Dempsey, foreword to War Stories from the Future

War Stories from the Future is the culmination of the Atlantic Council Art of Future Warfare project’s first year exploring the future of armed and social conflict.

Featuring a foreword by Martin Dempsey, former Chairman of the Joint Chiefs of Staff, the collection features new science fiction stories, as well as the project’s contest-winning short-story writers and visual artists.

The anthology explores many of the most important looming issues in defense and security, but in a way that no white paper or policy brief can.

To do so, the project commissioned established writers such as Ken Liu (privateers in cyber war) and Madeline Ashby (war breaking out in the world’s most connected city in Korea as experienced by its least connected population, street vendors), Jamie Metzl (the operational implications of bio-enhanced targeting and weaponry), Mathew Burrows (effective foresight in intelligence), and project Director August Cole, who edited the collection (swarm warfare and crowd-sourced intelligence). The collection also features two stories from best-selling science-fiction writer David Brin (the nature of heroes and warriors) and Linda Nagata (linked ground combat overseen from afar).

Crowd sourcing is a cornerstone of the project’s goal of bringing in new voices. The anthology includes contest-winning stories from Alec Meden (drone operations in space and non-state actors), Nikolas Katsimpras (outbreak of a great power war), and Ashley Henley (the president’s address after a catastrophic cyber attack). Visual artists EG Douglas and Sam Cole (propaganda posters from the next world war) and Alex Brady (future of urban warfare) also feature in the collection.

The Atlantic Council’s Art of Future Warfare project is driven by the Brent Scowcroft Center on International Security’s mandate to advance thinking and planning for the future of warfare. The project’s core mission is to cultivate a community of interest in works and ideas arising from the intersection of creativity and expectations about how emerging antagonists, disruptive technologies, and novel warfighting concepts will shape tomorrow’s conflicts.