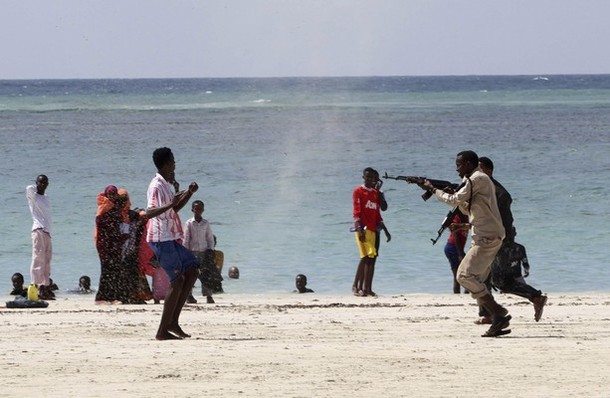 In the second of the new series of “IntelBriefs” on African security issues being produced by the Atlantic Council’s Africa Center in partnership with the Soufan Group, an international strategic consultancy, Ansari Center deputy director Bronwyn Bruton notes that while life has been improving for the residents of Mogadishu after five years of war and the worst famine in twenty years, the gains are fragile and overstated. She also warns that while the al-Qaeda-linked al-Shabaab movement may be headed for military defeat, its attacks on civilians are far from over. Moreover, the rivalries and grievances that fueled insurgency in the first place remain and, without a plan for resolving Somalia’s longstanding clan conflicts, the country’s prospects remain bleak.

As of mid-April 2012, there are signs that life in Somalia’s war-torn capital, Mogadishu, is beginning to slowly return to a relative level of normalcy. The country’s al Qaeda-linked rebel movement, al Shabaab, pulled the majority of its fighters out of Mogadishu in July of last year. The move was a tactical withdrawal, but Somalia’s weak Transitional Federal Government called it a military victory and quickly announced control of the city. Since then, a flurry of newspaper articles, replete with photos of children frolicking on the beach for the first time since the Union of Islamic Courts controlled the city in 2006, have announced the resurrection of daily life in Mogadishu. A recent front-page article in the New York Times trumpeted news of Mogadishu’s new business and construction boom: markets are bustling, returnees are flooding the city, and vendors are finally making money. Government buildings are being reconstructed with the help of foreign donors, and investment by the Somalia diaspora seems to be on an upswing. There is even some guarded optimism that the dysfunctional south and central regions of Somalia may finally be able up to catch up with the autonomously governed and comparatively stable northern territories of Somaliland (which has unsuccessfully demanded independence from Somalia) and Puntland.

There is also undeniably good news on the southern military front: al Shabaab has lost control of several strategically vital cities, including Beletweyne and Baidoa, and is on the verge of losing Afmadow. It’s only a matter of time before the Kenyan troops, newly re-hatted as members of the African Union peacekeeping force and bolstered by an infusion of Western funds, complete the march to al Shabaab’s last stronghold, the port city of Kismayo. Kenyan capture of Kismayo will eventually present its own set of problems, but in the meantime, public support for al Shabaab is at an all-time low, and two of the group’s most high-profile leaders, the American rapper Omar Hamammi and the “father of Somali Islam” Sheikh Hassan Dahir Aweys, have publicly broken rank with their jihadi colleagues. In the past month, both have been rumored dead at the hands of their fellow Shabaab. The rumors have proven exaggerated, but the schisms within al Shabaab are not. The jihadis are clearly at each other’s throats, and the group’s “nationalist” faction appears open to joining the political process, if their key demands are met.

Any good news from Mogadishu is worth celebrating, but the recent news of an economic upswing is at best a selective perspective that dramatically overstates the improvements on the ground in Southern Somalia. While there is indeed a construction boom in progress, it has affected only a tiny fraction of Mogadishu’s devastated structures. And while there are a lucky few vendors and returnees who are trading profitably as a result of the increased security on Mogadishu’s streets, for the vast majority, poverty and hunger is the norm. Local humanitarian groups are reporting, for example, that the malnutrition rate among 5 to 10 year-olds is still topping 40 percent. Adding to the prevailing food insecurity is a looming risk of famine in the months ahead.

Moreover, the relative calm permeating most of the neighborhoods of Mogadishu is the restive calm of occupation. Foreign peacekeepers have driven out al Shabaab and are still protecting the government from its own population. But even with some 17,000 foreign troops moving in and out of the city, bombings, assassinations and other terror incidents are almost daily events. The African Union has no mandate to police the population, and the Somali “army” remains a patchwork collection of private militia working under the orders of clan bosses and warlords, and without any particular loyalty to the government.

Al Shabaab withdrew most of its fighters in July, citing a change in tactics, but still has hundreds of fighters and several functional training camps in the city. The group will undoubtedly continue to use unpredictable terror tactics to play a destabilizing spoiler role – and civilians will continue to suffer the brunt of the casualties.

Looking to the Future

Somalia’s political process is in shambles. After multiple extensions, the transitional government’s mandate is set to expire this August, and there is a widespread expectation that the current crop of leaders will be demoted or replaced. But because of local and donor country dithering, no one has any sense of who or what will be coming next. At present, the clans have been content to maneuver quietly behind the scenes, but an unacceptable distribution of power in August could spark real unrest. That isn’t likely – a far more predictable scenario is that the transitional process will stall, and there will be no significant changes to the government in August. If so, the Somalis’ sense of optimism – much of which stems from the perception of renewed donor interest in Somalia – will be sharply dampened.

Ironically, the stability of Somalia depends more on what happens to al Shabaab’s nationalist branch than on resuscitating the transitional government. Al Shabaab’s so-called “nationalist” leaders represent large constituencies on the ground, and there cannot be peace in Somalia if those constituencies continue to be excluded from the political process. If the regional powers – primarily Ethiopia and Kenya – as well as the United States and its allies, can be brought to accept the defection of the nationalist leaders from al Shabaab and to tolerate their entry into the political process, the foreign radicals could be isolated, and the ideological dimension of the Somalia conflict could be muted. Shifting the focus away from the terror threat and towards Somalia’s real problems – poverty and unresolved clan conflicts – would be a giant leap forward in the peacebuilding and reconstruction process, and U.S. counterterror efforts would materially benefit.