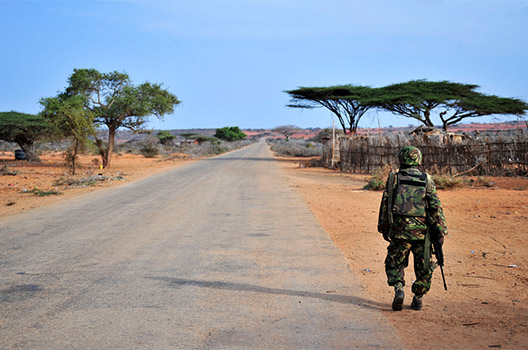 Since its inception in 2012, the Federal Government of Somalia (FGS) has cooperated with Kenya. Both governments are at war with the Somalia-based terrorist group al-Shabab, whose multiple terror attacks on Kenyan soil have threatened tourism and economic development. Such concerns prompted Kenya to invade Somalia in October 2011 and its troops have remained in the strategically vital port of Kismayo despite the Somali government’s objections.

Nairobi has often appeared to exploit its legitimate security concerns over al-Shabab to pursue its own interests inside Somalia, ever since it invaded its neighbor in 2011, a year before the current Somali regime was installed. The United Nations has accused the Kenyan Defense Forces (KDF) of flouting a ban on charcoal exportation—which also has been a major source of funds for al-Shabab—and causing serious environmental degradation. Nairobi has also meddled freely in the construction of the rivalrous “Jubaland” statelet in southern Somalia. Some Somali parliamentarians were so incensed by Kenya’s interference that they threatened legislation to kick the KDF out of Somalia. Somalia’s President Hassan Shaykh Muhammad publicly accused the KDF of misbehaving in Kismayo and violating the African Union Mission in Somalia (AMISOM)’s mandate.

Recent events have led to further deterioration in the bilateral relationship. After triple bomb blasts ripped through the predominately ethnic Somali neighborhood of Eastleigh in Nairobi on March 31, Kenyan security forces responded with a nationwide crackdown, Operation Usalama (“Peace”) Watch, which has been marred by allegations of extortion, beatings, extralegal detentions of women and children, and intimidation. Undocumented foreigners of many nationalities have been detained in security sweeps, but the majority of those targeted have been ethnic Somalis. The crackdown has aggravated longstanding tensions between ethnic Somali-Kenyans, the government, and non-Somali Kenyans.

The Somali government has little leverage over Nairobi and—perhaps in recognition of its powerlessness to influence events—has remained staunchly silent throughout the crackdown. It was not until the arrest of a Somali consular employee on April 25 that Somalia’s President Hassan made a show of diplomatic protest, blasting the detention as “barbaric” and withdrawing his ambassador. The following day, Somali Prime Minister Abdiweli Shaykh Ahmad broke his government’s silence on Usalama Watch, publicly announcing the government’s concern over Kenya’s arrest of thousands of innocent Somalis.

International concerns surrounding Kenya are weighted more toward its near-term stability, rather than an ability to engage in military operations in the Horn of Africa and beyond. Moreover, its approach to the minority Somali community in Kenya may be exacerbating a chronic domestic and foreign extremist problem.

Nonetheless, barring tangible pressure from the international community, Kenya will continue its crackdown on the Somali community. And such pressure is unlikely to come: Kenya is still regarded as a critical ally in the fight against terrorism in the fragile and critical Horn of Africa region, and the Western donor community has generally been reluctant to intervene in Nairobi’s affairs.

The diplomatic spat between Nairobi and the FGS has strained an already tense relationship in which bilateral cooperation has been uneven and difficult. But a serious rupture is unlikely. The Somali government’s dependence on AMISOM has created an acute imbalance of power between the two allies. As long as Washington, London, and Brussels choose to legitimize (and bankroll) the Kenyan and Ethiopian troop contributions to the AMISOM peacekeeping mission, Mogadishu’s protests over Kenya’s intrusions on Somali sovereignty will be moot, at best; at worst, they will highlight the powerlessness of the fledgling administration. The prime minister’s weak expression of “serious concerns” over the apparently extensive violations of Somali-Kenyan human rights is a case in point. The FGS’ recall of its ambassador is an important face-saving gesture, but Mogadishu will certainly return its ambassador to Nairobi after a short interval.