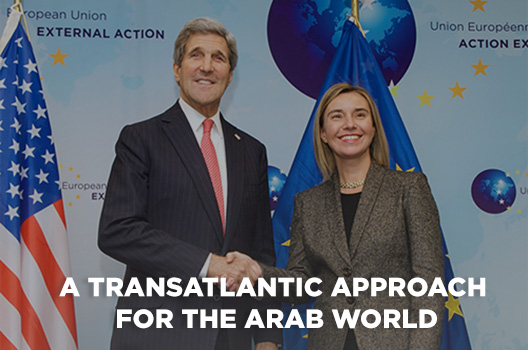 A new Atlantic Council report warns against the tendency of Europe and the United States to sideline political and economic reform in the Middle East while they pursue urgent security priorities in this turbulent region. Instead, the transatlantic partners should forge a shared strategy to encourage political systems that can protect Arab citizens’ basic rights, provide security, deliver broad prosperity, and mitigate violent extremism.

In “A Transatlantic Approach for the Arab World: Stability through Inclusivity, Good Governance, and Prosperity,” Frances G. Burwell, Danya Greenfield, and Amy Hawthorne argue that despite the region’s rising security challenges, now is the time for the United States and Europe to develop a joint, long-term strategy to promote more open and inclusive political and economic systems there.

In its remaining two years, the Obama administration should craft a well-resourced agenda for a positive legacy in the Middle East. In Brussels, a new European Union (EU) leadership is reshaping its European Neighborhood Policy for the southern Mediterranean. The fourth anniversary of the 2011 Arab uprisings is a powerful reminder that authoritarian rule cannot bring lasting stability or security for the region’s citizens, Europe, and the United States.

The authors argue that the Arab world’s complex governance challenges require a more active European-US approach, drawing on the unique global strength of the shared democratic values that are the foundation of the transatlantic alliance. By working together more strategically, the United States, EU, and key European member states can amplify their limited regional influence. They should work collaboratively to design country-specific approaches that:

This report has been produced as part of a two-year initiative supported by the EU Delegation in Washington, DC, to advance transatlantic dialogue on support for political and economic reform in the Arab world.

Burwell is Vice President and Director of the Council’s Transatlantic Relations program.

Greenfield is Deputy Director of the Council’s Rafik Hariri Center for the Middle East.

Hawthorne is Senior Fellow of the Council’s Rafik Hariri Center for the Middle East.