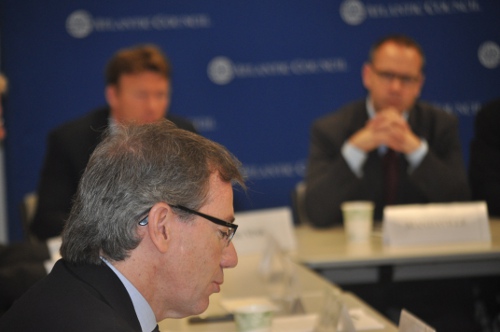 In advance of the US-EU summit on November 28 in Washington, DC, the Atlantic Council’s Rafik Hariri Center for the Middle East and Transatlantic Relations Program released “A US-EU Action Plan for Supporting Democratization: Egypt, Libya, and Tunisia.” In partnership with the Polish Institute for International Affairs (PISM), the Atlantic Council developed an action plan with concrete policy recommendations for a coordinated US-EU approach to support democratic transitions taking place in the Middle East and North Africa.

The recommendations were drawn from a workshop on November 8-9, 2011 organized by the Atlantic Council and PISM that included participation from more than 35 senior-level officials from the US government and European Union, analysts, and practitioners from the United States, Europe, and the Middle East.  During these discussions, Ambassador William Taylor, Special Coordinator for Middle East Transitions at the US State Department noted, “While ownership of the process belongs to the citizens of these countries, the United States and Europe have a great deal at stake.  The United States and EU must leverage all possible resources to support a democratic transition that guarantees the rights of all citizens, upholds the rule of law, and enshrines basic civil liberties.  If both the United States and the EU are saying the same message, it will be much more effective.”

Authored by Danya Greenfield, deputy director of the Rafik Hariri Center for the Middle East, the report outlines ten key policy recommendations the United States and Europe should follow in order to support Egypt, Libya, and Tunisia towards sustainable democratic governance.  Recognizing current budget constraints, the report calls on the United States and the EU to coordinate debt relief, provide increased access to US and EU markets through bilateral free trade agreements, promote foreign investment to spur growth, and encourage discussion of a sub-regional economic bloc among Egypt, Libya, and Tunisia.

The report notes that the US and EU commitment to assisting the transitional governments should be made clear at the US-EU summit, including a detailed plan aimed at building strong economies, advancing security sector reform and civil-military relationships, and strengthening political institutions and civil society. By combining and leveraging shared resources, the United States and EU can advance their own interests and be effective in helping countries in the Arab world achieve a peaceful and successful transition to real democratic systems.

About the Rafik Hariri Center for the Middle East: The Atlantic Council’s Rafik Hariri Center for the Middle East seeks to produce original analysis of the forces transforming the region, as well as policy recommendations for the United States and Europe about how to promote closer and more productive relations with the region. The Hariri Center recognizes the substantial linkages between political and economic affairs, and will develop policy initiatives to promote successful democratic transitions and greater convergence among the Middle East, the United States, and Europe. The Center is dedicated to the memory of the late Lebanese Prime Minister Rafik Hariri and his efforts to rise above sectarianism and to promote innovative policies to support economic and political liberalization, sustainable conflict resolution, and greater regional and international integration.