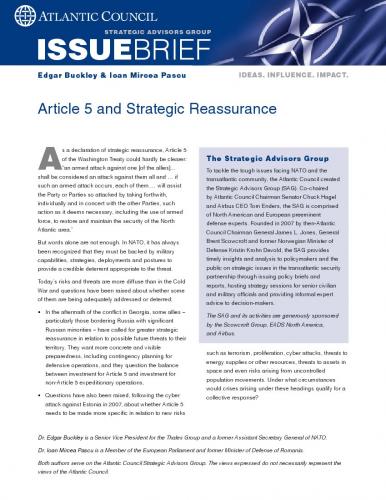 Edgar Buckley and Ioan Mircea Pascu, members of the Strategic Advisors Group (SAG), discuss the implications of the use of force, preemption, and assessment of new risks as it relates to the Strategic Concept in the SAG issue brief “Article 5 and Strategic Reassurance.”

As a declaration of strategic reassurance, Article 5 of the Washington Treaty could hardly be clearer: “an armed attack against one [of the allies]… shall be considered an attack against them all and … if such an armed attack occurs, each of them … will assist the Party or Parties so attacked by taking forthwith, individually and in concert with the other Parties, such action as it deems necessary, including the use of armed force, to restore and maintain the security of the North Atlantic area.”

But words alone are not enough. In NATO, it has always been recognized that they must be backed by military capabilities, strategies, deployments and postures to provide a credible deterrent appropriate to the threat.