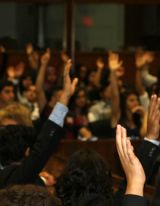 In a new Atlantic Council issue brief, Breaking Taboos: Youth Activism in the Gulf States, Visiting Senior Fellow Kristin Diwan contends that youth activists are bringing new forms of civic engagement and political contestation to the Arab states in the Gulf region.  Evaluating  youth movements in Saudi Arabia, Kuwait, and Bahrain, Diwan contends that although youth activists have recently suffered setbacks under government restrictions, the political implications of a growing youth population will intensify, especially as an aging Gulf leadership faces its own generational transition.

In the paper, Diwan highlights the following key developments: