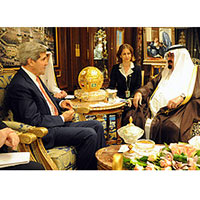 A new Atlantic Council issue brief, “Building a Better US-Gulf Partnership,” contends that the United States and its Gulf partners must prioritize and build on their shared interests in light of ongoing erosion of ties, and a fundamental gap in expectations about the US role in the region and its commitment to security for the Gulf states.

Issue brief author Richard LeBaron, a senior fellow at the Atlantic Council’s Rafik Hariri Center for the Middle East, argues that tensions between the United States and its partners in the Gulf have flared up visibly in the last several months, notably with Saudi Arabia’s public displays of displeasure with the US approach to the Syria conflict, nervousness about an interim nuclear deal with Iran, and sharp differences over Egypt. The report’s central conclusion is there is far more room for greater convergence and better practical cooperation to address shared interests. LeBaron calls for a more strategic, less transactional approach to the relationship. Specifically, the author argues this new approach will require high-level US attention over many years, offering two specific recommendations to build on shared interests: