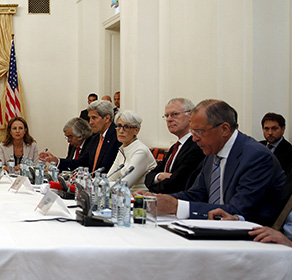 As negotiations resume today in Vienna between Iran and the five permanent members of the UN Security Council plus Germany, the Atlantic Council’s Iran Task Force introduces two papers that outline options for unwinding US and European sanctions against Iran—a key element of any long-term agreement curbing Iran’s nuclear program.

“Easing US Sanctions on Iran,” by Kenneth Katzman of the Congressional Research Service, examines actions the United States could take to wind down sanctions imposed on the Islamic Republic beginning with the 1979 revolution and ratcheted up over the past decade as a means to deter the development of Iran’s nuclear program.

Among the possible steps outlined in the piece, Katzman highlights a key piece of legislation, the Iran Sanctions Act, set to expire as scheduled at the end of 2016. Katzman notes that allowing this act to sunset “would reopen Iran’s energy sector to unimpeded foreign investment and would enable Iran to begin expanding oil and gas production again after many years of stagnation.”

In a companion piece, “Easing EU Sanctions on Iran,” Cornelius Adebahr of the Carnegie Endowment for International Peace notes that European sanctions relief must be coordinated with the United States in order to ensure that European businesses can return to the Iranian market without fear of facing so-called secondary sanctions by US authorities.

Adebahr suggests that sanctions relief focus on four areas identified by the Iranians as among their top priorities: