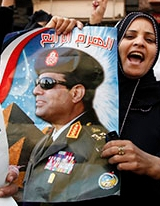 In a new Atlantic Council issue brief, “Getting Democracy Promotion Right in Egypt,” Amy Hawthorne contends that although the near-term prospects for democracy in Egypt are bleak, there is more the United States can do to promote democratic change over the longer term.

Hawthorne, a senior fellow at the Atlantic Council’s Rafik Hariri Center for the Middle East, argues that advancing US security interests in Egypt ultimately depends on stability there, which cannot be achieved without a consensus-based, rights-protecting political system. She acknowledges that although US influence is limited and Washington needs to deal with Egypt on a range of important security issues, democracy should still be a cornerstone of US policy toward Egypt.

The United States should signal its concerns more clearly about Egypt’s current repressive path, Hawthorne writes, by restructuring parts of its security relationship and by withholding democratic legitimization and offers of expanded economic engagement until genuine democratic progress can be seen. The United States should also foster greater ties between young Egyptians and American higher education institutions, civil society groups, and the private sector; over time, such links could help strengthen local constituencies for democracy in Egypt.

The author highlights four recommendations for the United States to redefine its engagement with Egypt: