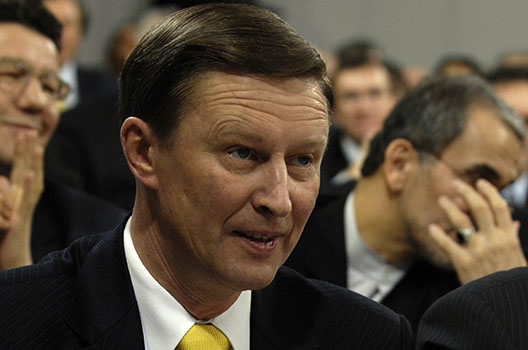 Over the past eighteen years, Vladimir Putin has perfected a peculiar style of rule in Moscow. A product of the KGB, Putin quickly appointed many of his siloviki colleagues to senior positions in the government shortly after coming to power. Once in office, his associates enriched themselves by looting state resources and seizing vulnerable private resources. The quest for economic gain also opened the door to cooperation between senior government officials and organized crime.

Image: Russian Defense Minister Sergei Ivanov takes notes as Defense Secretary Robert Gates addresses the audience during the 43rd Annual Conference on Security Policy in Munich, Germany, Feb. 11, 2007. The theme for the conference is "Global Crisis-Global Responsibilities" and Gates' speech is about "The Transatlantic Relationship in the 21st Century." Defense Dept. photo by Cherie A. Thurlby (released)