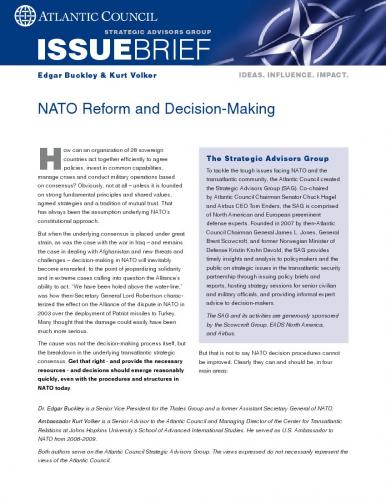 How can an organization of 28 sovereign countries act together efficiently to agree policies, invest in common capabilities, manage crises and conduct military operations based on consensus? Obviously, not at all – unless it is founded on strong fundamental principles and shared values, agreed strategies and a tradition of mutual trust. That has always been the assumption underlying NATO’s constitutional approach.

But when the underlying consensus is placed under great strain, as was the case with the war in Iraq – and remains the case in dealing with Afghanistan and new threats and challenges – decision-making in NATO will inevitably become ensnarled, to the point of jeopardizing solidarity and in extreme cases calling into question the Alliance’s ability to act. “We have been holed above the water-line,” was how then-Secretary General Lord Robertson characterized the effect on the Alliance of the dispute in NATO in 2003 over the deployment of Patriot missiles to Turkey. Many thought that the damage could easily have been much more serious.The cause was not the decision-making process itself, but the breakdown in the underlying transatlantic strategic consensus. Get that right – and provide the necessary resources – and decisions should emerge reasonably quickly, even with the procedures and structures in NATO today.