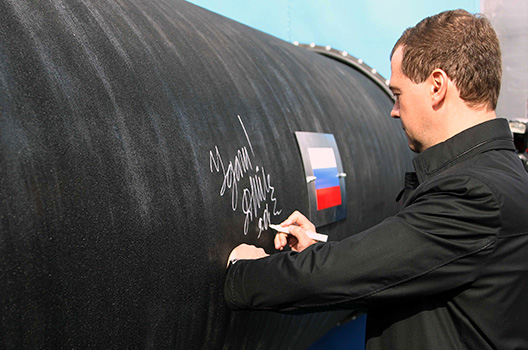 Germany may be seeking to expedite the construction of Russia’s Nordstream 2 pipeline by shielding the controversial project from tough the laws of the European Union (EU), according to a transcript of talks between Russian President Vladimir Putin and German Energy Minster Sigmar Gabriel, Atlantic Council Senior Fellow Alan Riley writes in “Nordstream 2: Too many obstacles, legal, economic, and political to be delivered?”.

Despite Germany’s move, however, Riley argues that the pipeline is unlikely to be completed by its slated 2019 opening date. The EU, undeterred by Germany, will likely demand that its energy laws be rigorously applied, given that if Nordstream 2 came online it would undermine EU supply security and conflict with the EU’s fundamental liberalization rules. Even without these political and legal issues, Riley writes that Gazprom will find the pipeline too costly to build as financing costs have grown too great amid the EU’s shrinking gas market and the long shadow cast by sanctions on Russia. While Nordstream 2 may once have seemed a politically and economically viable project, the Ukraine crisis has so altered the landscape that, according to Riley, Gazprom may “have taken on a project that is undeliverable.”