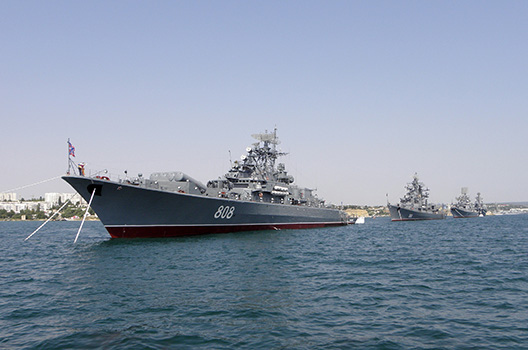 In “The Militarization of Crimea under Russian Occupation,” Crimean activist Andrii Klymenko explains how the Kremlin has moved to tighten its grip on Crimea as the world turns its focus toward Syria. Indeed, Russia has proven itself to be settling in for the long haul in Crimea, with mass relocations of Russian military servicemen to the peninsula spurring housing shortages and massive infrastructure projects.


Against the drumbeat of the Russian military’s steadily rising presence on the Black sea peninsula, Moscow has stepped up pressure on human rights groups, NGOs, and journalists, while ruthlessly suppressing even minor shows of support for Kyiv. Russian security services have targeted Crimea’s Tatar minority in particular, with the two leading Tatar media outlets shuttered and many activists exiled or arrested in recent months. Russia has been ever more willing to prosecute even minor acts of defiance. Most recently, on August 24, Crimean police arrested a group of people who were celebrating Ukraine’s Independence Day by laying flowers at a monument to Ukrainian poet Taras Shevchenko.

While Russia’s actions in Syria may be making headlines, the Kremlin’s policy of repression and consolidation in Crimea has continued unabated.