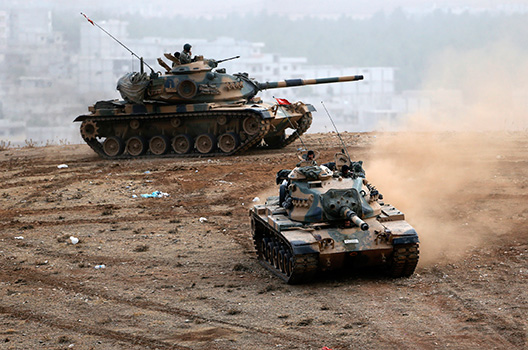 Turkey has been the most engaged regional player in northern Syria and is the external actor most responsible for the emergence of the opposition to the Syrian regime. In “Turkey’s Syria Predicament,” authors Faysal Itani and Aaron Stein of the Atlantic Council’s Rafik Hariri Center for the Middle East examine Turkey’s involvement, its implications for Turkish domestic politics, its impact on the Syrian insurgency and course of the war, and the implications for US foreign policy.

Itani and Stein explore the evolution of Turkish foreign policy as it moved from strengthening relations with the Assad regime in 2002 to actively participating in the conflict after severing ties with the regime in late 2011. Turkey has since emerged as the most important conduit for arms and aid to the anti-Assad opposition, as well as their most forceful advocate for the imposition and enforcement of a no-fly-zone over much of, if not all, of Syria. However, factors including the emergence of the al-Qaeda-affiliated Nusra Front, the Kurdish majority Democratic Union Party’s (PYD’s) centrality to the US Syria policy, and Russian support for the Syrian regime have posed severe challenges to Turkey’s Syria strategy.

Moving forward, the diverging priorities between Turkey and the United States have created challenges for sustained collaboration in Syria. The authors describe how the US-Kurdish partnership has antagonized Turkey and its longer term interests in the region. In turn, Turkey feels threatened by the potential of a unified Kurdish territory in Syria and has been experiencing the consequences of rising tensions with armed Kurdish groups within its own borders. Itani and Stein describe how the battle for Kobani and subsequent strategy to defeat Islamic State have crystallized the US-Turkish disagreement.

The authors explain these divergences and offer potential areas of collaboration between Turkey and the United States to defeat the Islamic State of Iraq and al-Sham (ISIS), particularly in the so-called Manbij pocket, the last territory that ISIS controls along the border with Turkey. Critical to the region is the Syrian town of Jarabulus, which borders Kurdish PYD-held territory to the east and has been under ISIS control since 2013. The piece considers the costs and benefits of a joint US-Turkish military operation to take this city from ISIS control. The outcomes may depend on US involvement in restraining the PYD and communicating a firm position with Russia, but such an endeavor could be a crucial starting point for more cooperative work with a Turkey that shows few signs of disengagement from Syria.