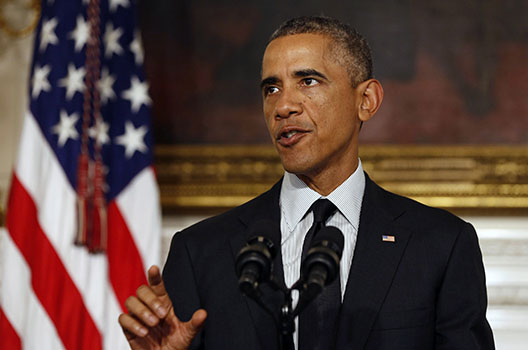 U.S. President Barack Obama speaks about the vote on Capitol Hill on his request to arm and train Syrian rebels in the fight against the Islamic State while in the State Dining Room at the White House in Washington, September 18, 2014. The U.S. Senate approved Obama's plan for training and arming moderate Syrian rebels to battle Islamic State militants on Thursday, a major part of his military campaign to "degrade and destroy" the radical group. REUTERS/Larry Downing

Seven years from the Syrian revolution, the conflict in Syria has altered the course of history for the generation coming of age in the region. It has killed, wounded, or displaced millions of Syrians, worsened regional sectarianism, raised the risk of war between Israel and Iran, generated the worst refugee crisis since World War II, and created a new and more pernicious wave of violent radicals. Its effects extend beyond the region, shaping the outcome of politics around the world.

US Policy in Syria: A Seven-Year Reckoning, by Atlantic Council Senior Fellow Faysal Itani and New America International Security fellow Nate Rosenblatt, is a retrospective analysis of key US policy decisions in Syria and how they shaped the Syrian revolution’s outcome. It also draws broader lessons about US policy in the region based on the United States’ actions in the twenty-first century’s most acute and profound geopolitical crisis, and outlines the key policy challenges ahead in Syria.