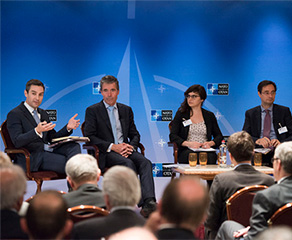 Heads of state and government from all 28 NATO nations will convene at the NATO Summit in Wales this September to reaffirm the importance of the Trans-Atlantic bond and build a strong foundation for its future. To help Alliance leaders accomplish this task, NATO commissioned a working group of emerging leaders from member countries to provide concrete proposals that support a renewed Trans-Atlantic bond and asked the Atlantic Council to facilitate this process. Through an open and competitive call for applications, the Council selected a representative group of fifteen exceptional emerging leaders to participate in the working group.

These emerging leaders presented their proposals in a report to Secretary General Anders Fogh Rasmussen and discussed their recommendations with senior Alliance leaders and experts in Brussels on June 10, 2014. The group previously convened at the Council’s April 2014 Towards a Europe Whole and Free conference in Washington, DC and will meet next at the NATO Future Leaders Summit that the Atlantic Council is organizing alongside the Wales Summit.

Full program background on this initiative is available here (PDF)