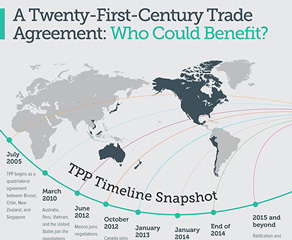 The Trans-Pacific Partnership (TPP) began in 2004 as an inter-regional effort by four countries on the Pacific Rim to liberalize trade and investment. Ten years later it has grown to twelve member countries that represent 40 percent of global GDP, 26 percent of global trade, and 40 percent of US trade. It is the first major “twenty-first-century” trade negotiation encompassing not only tariffs and quotes but also new areas like regulatory cooperation, competition policy, environment and labor, and trade in digital goods and services. Find out what’s at stake for the United States, who could benefit from TPP, and key sticking points of the agreement in the Atlantic Council’s infographic.