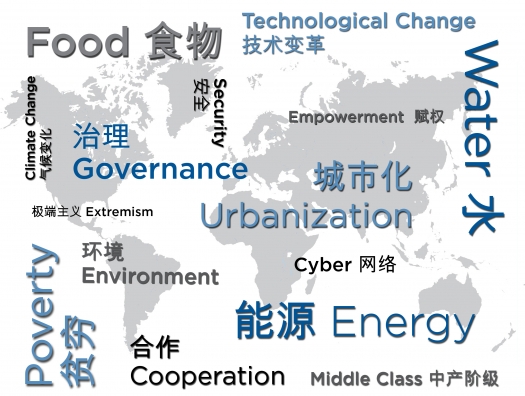 A new and unprecedented report prepared by a team of Chinese and American strategic thinkers concludes that the two countries are not adequately addressing critical global challenges of the 21st century. China-US Cooperation: Key to the Global Future calls for the creation of a Vision Group of senior American and Chinese nongovernment and former government experts to build on the idea of a new great power relationship proposed by China’s President Xi Jinping.  A China-US Joint Working Group convened by the Atlantic Council in Washington and the China Institute of International Studies (CIIS) in Beijing produced the report, with generous support from the China-United States Exchange Foundation.

The China-US Joint Working Group assessment builds on reports by experts in the two countries, including the US National Intelligence Council’s Global Trends 2030: Alternative Worlds, which the Atlantic Council helped prepare, and Global Trends to 2030 and the Prospects for China-US Relations, prepared under the direction of CIIS and Peking University’s School of International Studies.

The world has achieved unprecedented peace, prosperity, and interdependence, but past achievements—and further progress—are threatened by a host of looming challenges that cannot be met over the long term without the two countries working in cooperation with others:

This report points to a number of trends and possible scenarios in US-China relations that could imperil the prospects for cooperation. Although the authors of the report strongly believe that the United States and China do not need to repeat the history of conflict between major powers, the authors are concerned that the narrative about the inevitability of such conflict has become popular on both sides of the Pacific.

The authors call for the creation of a joint “Vision Group” to supplement existing mechanisms that will be empowered to focus on the longer term global challenges. Existing mechanisms between the United States and China must continue to resolve disputes, but resolving current issues must not be a prerequisite for tackling longer term challenges. Cooperation on longer term challenges is too important to the people of both countries, indeed of all countries, to delay work on them. Going beyond the current short-term, tactical focus of US-China dialogues will require sustained commitment of leaders in both countries.