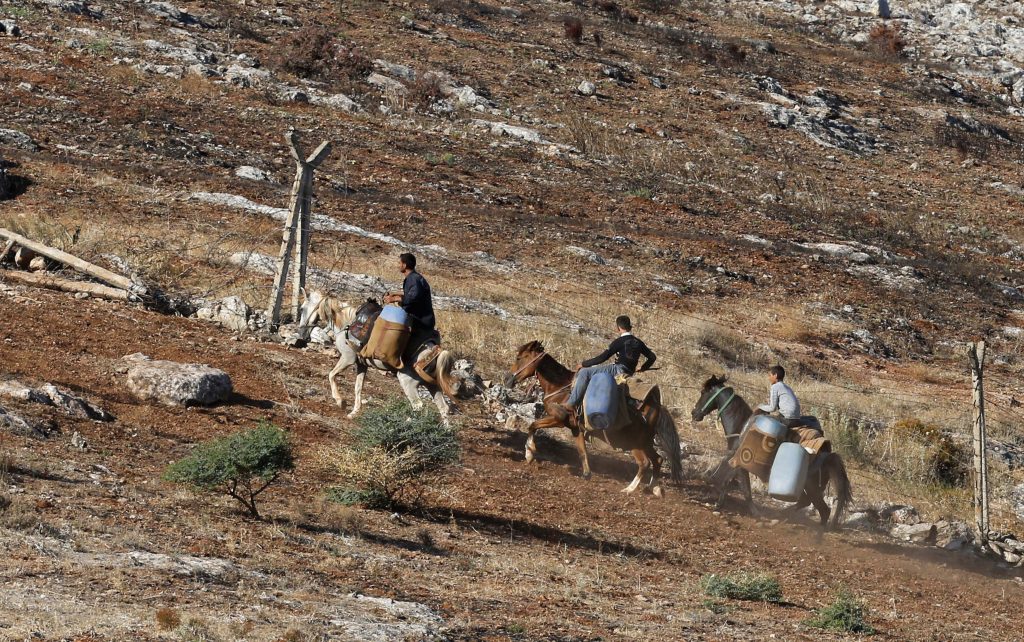 Smugglers carrying blue jerry cans on horses ride back to Syria along the wire fences after ferrying fuel smuggled into Turkey from over the border in Syria, 2 km (1.2 miles) away from the Turkish Cilvegozu border gate, located opposite the Syrian commercial crossing point Bab al-Hawa in Reyhanli, Hatay province, September 8, 2013. Each night, fuel is smuggled into Turkey from over the border in Syria. The thousands of liters of diesel that make their way by cover of darkness to Turkey's southern Hatay province are a financial lifeline for Syria's rebels, as well as a source of income for Turkish middlemen. Much of the oil is sourced from Syria's eastern Deir al-Zor province, a region critical to the country's overall output, which largely fell under the control of a network of tribes and smugglers earlier this year. Fuel is heavily taxed in Turkey, meaning the black market for illegal imports from Syria, however crudely refined in makeshift facilities, is thriving and sends cash back to the rebels fighting against President Bashar al-Assad. Picture taken September 8, 2013. REUTERS/Umit Bektas

On January 13, 2017, the Atlantic Council launched a major study on downstream oil theft at its inaugural Global Energy Forum in Abu Dhabi, United Arab Emirates. Downstream oil theft: Implications and next steps draws on the launch event to examine the implications of the study’s findings and to suggest tangible next steps in both further investigating this global scourge and beginning to confront it effectively.