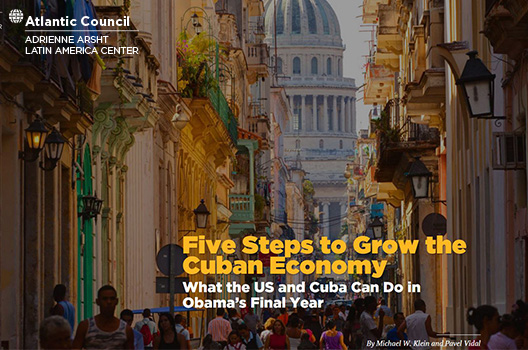 Twenty-five days before US President Barack Obama touches down in Havana, the Atlantic Council’s Adrienne Arsht Latin America Center launched a new report that lays out the next step for Cuba’s continued progress. For the United States and Cuba to continue building on progress in the bilateral opening, the two countries must work to integrate the island into the global financial system. That starts with creating a Cuban seat in the Inter-American Development Bank (IDB) – an action President Obama can set forth in 2016.

Five Steps to Grow the Cuban Economy: What the US and Cuba Can Do in Obama’s Final Year sets a path to developing a working financial system in Havana and bringing Cuba into the global fold. The report, authored by former Cuban Central Bank analyst and scholar Pavel Vidal-Alejandro and former chief economist at the US Department of the Treasury Michael Klein, shows that economic changes are clearly already underway in Havana. President Obama will see these development first-hand in March. Still, Cuba desperately needs a functional financial system and access to funds, which IDB membership can facilitate.

In addition to removing obstacles to Cuban accession to international financial institutions, the report lists other recommendations for the US government to help grow the Cuban economy:
• Remove financing restrictions for agricultural commodities and items
• Liberalize banking rules to allow accounts for Cuban nationals that can be used both when in Cuba and abroad and enable US banks to operate within Cuba
• Allow the US dollar to be used for transactions with Cuba;
• Signal to foreign banks that they will not be prosecuted for operating in Cuba

The report states that, for its part, the Cuban government must integrate with the international financial system by seeking membership in international financial institutions and taking the following steps:
• Begin gradual financial liberalization that includes appropriate oversight of financial institutions and the development of an interbank market in government securities
• Open the door to foreign bank branching in Cuba to jumpstart the provision of finance
• Set the stage for a successful move to dia cero, when the currencies are unified, which includes determining and clearly signaling the unified exchange rate for the new currency
• Allow international microfinance providers and NGOs to offer microfinance in Cuba
• Foster the expansion of online banking services and mobile banking to improve retail banking and customer access to finance