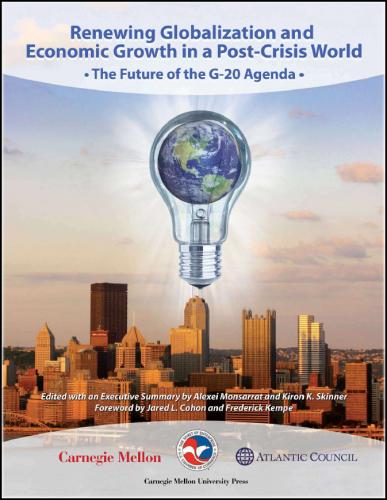 On the eve of the Pittsburgh G20 Summit, the Atlantic Council and Carnegie Mellon University examine the next steps for economic growth after the global financial crisis in Renewing Globalization and Economic Growth in a Post-Crisis World: The Future of the G20 Agenda.  The report is a product of an all-day expert conference in Pittsburgh.

“One very clear lesson of the past year . . . is that a full-blown financial crisis can exact an enormous toll in both human and economic terms.” — U.S. Federal Reserve Chairman Ben Bernanke, Jackson Hole, Wyoming, August 21, 2009

This statement, delivered by Federal Reserve Chairman Bernanke in the understated manner of a central banker, was made nearly a year after the collapse of Lehman Brothers—the event that tipped the global financial system into full crisis. Bernanke’s message starkly reveals the scope of the challenge facing the stewards of the global economy.

We believe that the toll the crisis has exacted in human and economic terms constitutes a serious challenge to globalization itself.

The actions taken by financial authorities and governments around the world have been instrumental in preventing a full-scale global depression, but the crisis has exposed deep inequalities and structural problems in the international economic system. The G20 summit to be held on September 24-25, 2009, marks the third time in less than a year that the leaders of the member states have assembled to redress weaknesses in the global economic system, rebuild confidence, and ensure that the recent economic crisis will not be repeated—at least not in the same way. This is an immensely challenging task; in addition to the issue of financial regulatory reform, consideration must be given to regenerating economic growth and renewing globalization so that the benefits of the global economy may be broadly shared.

Our report seeks to provide ideas, analyses, and arguments for the various aspects of the expanded G20 agenda. It does so by bringing together experts who, through scholarly research, business activity, or policy engagement, have developed valuable perspectives on international politics, culture, markets, technology, or some combination of these issues. The viewpoints they express in their respective essays provide guidance for confronting the ongoing challenges posed by globalization.

A New Agenda for the G20

One definition of crisis is “turning point,” and that is where we find the global economy in September 2009 as G20 leaders assemble in Pittsburgh.

The question now is whether the G20 will expand its agenda to fully embrace the gravity of the global turning point we face.

We have defined a four-part agenda to confront this turning point, keeping in mind that an agenda that seeks to address such a sweeping mandate must be focused in order to be implemented, yet broad enough to engage the root causes of the challenge. The assembled authors— distinguished voices from business, academia, and the policy community—offer their visions of how the G20 nations can work together to renew globalization and economic growth in the post-crisis world by addressing:

1. Sources of growth and the role of innovation;

2. The role of financial regulation and trade in restoring growth;

3. Educating a workforce for the twenty-first-century economy; and

Sources of growth and the role of innovation;
The role of financial regulation and trade in restoring growth;
Educating a workforce for the twenty-first-century economy; and
Social and political challenges of renewing globalization.

The relationships among these weighty issues are complex. In our report, we seek to present a comprehensive, holistic approach that the G20 may use to confront these issues and progress from managing the crisis to restoring the global economy. What seems to bind the essays together, however, is an overarching commitment to make international forums such as the G20, as well as national governments, more effective tools of economic growth and political liberalization.