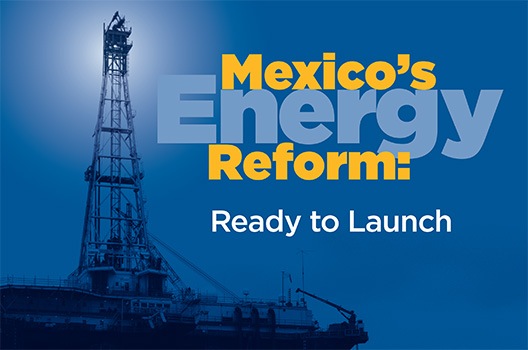 Co-authored by the Arsht Center’s Senior Nonresident Energy Fellow and former US State Department Special Envoy and Coordinator for International Energy Affairs, David Goldwyn, NEW report reviews the implementing legislation for the energy reforms signed by President Peña Nieto on August 11, 2014. It concludes that the reforms seek to increase investment in Mexico’s hydrocarbons sector and boost oil and gas production levels, and also present ample investment opportunities in the pipeline or midstream infrastructure that will bring natural gas to and throughout Mexico. “Natural gas is the lynchpin of the energy reform”, said Goldwyn, “The key to delivering lower cost and more reliable electric power to Mexico is increasing access to natural gas first by pipeline from the U.S., and then over time from indigenous production.”

The report assesses that the creation of a competitive market for electric power will be essential to creating broad-based economic growth and ensuring the long-term sustainability of the reforms. Mexico’s ability to ensure its new gas and power regulators enforce that competition will be a key bellwether for investors. Great interest is predicted in Mexico’s deepwater, shallow water, and heavy oil auctions, and in regulator-approved partnerships with PEMEX.

“It is impressive that, for the first time in 76 years, private companies will be able to participate in oil and gas exploration, either alone or through joint ventures,” said David Goldwyn. “Private companies will also be able to partner with PEMEX and will find it advantageous to do so in many circumstances. Such partnerships will contribute to PEMEX’s transformation into a more efficient, modern company with the ability, in the longer term, to serve as a capable deepwater and unconventional operator.” Unconventional oil and gas development faces greater challenges and the authors call on Mexican authorities to be creative in incentivizing investment in that sector.

The report identifies implementation as the key challenge that lies ahead. However, “Mexican authorities have repeatedly surpassed expectations in the speed and flexibility with which they have pursued these reforms,” said Goldwyn. “The ramp up in staff, the rapid action announced by President Peña Nieto, and the ambitious timetable for standing up the power market regulations all show that Mexico understands and is ready to meet this challenge.”

Goldwyn and his co-authors believe that the legislative infrastructure of the reforms is strong, and provide a market signal adequate to enable Mexico to begin realizing the benefits of the reforms well before energy production comes on line. They assert in the report that, “Investor confidence due to the reform will enable Mexico to quickly attract the capital necessary to spur near-term macroeconomic growth long before oil and gas flows appreciably increase.”

Major benefits of the energy reforms that the Peña Nieto Administration expects include:

The energy reforms’ benefits will extend beyond Mexico’s own economy. “By ushering in private investment from the U.S. and elsewhere, the reforms are capable of strengthening economic ties and fostering more integration across North America. The U.S. can maximize these benefits by prioritizing cross-border trade, including, in the near-term, fast tracking natural gas pipeline border crossings into Mexico to grow Mexican supply before large scale domestic production begins,” said Jason Marczak, deputy director of the Arsht Center. “As conflict and political uncertainty roil many parts of the world, North America’s energy future just became much more secure.”

The report also praises Mexico’s elected leaders for a “remarkable act of political bravery” in passing energy reform. After 70 years of de facto state control over the country’s energy sector, many thought that energy reform would simply prove too controversial. Yet, as Goldwyn and his co-authors observe, Mexico’s democracy was more than equal to the task.

“With the United States’ politics paralyzed by gridlock and partisan brinksmanship, Mexico’s leaders have offered a lesson on cooperation and political compromise,” said Peter Schechter, director of the Arsht Center. “This is an admirable long-term political bet that most politicians wouldn’t dare make.”