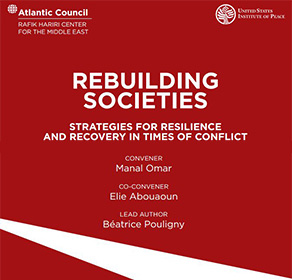 Download PDF
The forced displacement of unprecedented numbers of people within and beyond national borders has become an enduring yet fluid phenomenon across the Middle East and North Africa over the past decade. The Middle East Strategy Task Force’s Rebuilding Societies: Strategies for Resilience and Recovery in Times of Conflict report, published in cooperation with the United States Institute of Peace, discusses what can be done now to plant the seeds for a full recovery and social cohesion in societies that are in the midst of protracted violent conflicts, and provides more sustainable, coherent, and substantive answers to the ongoing refugee crisis.

The increased risks being taken by refugees and asylum-seekers, including those who are crossing the Mediterranean in very dangerous conditions, and the sharp increased flow through the Balkans and Europe illustrate their level of desperation. They are also a reflection of the failure of both national leaders and the international community to address the violent conflicts as well as the elements of fragility that lead to them in a sustainable way.

Read the Executive Summary in Arabic.
Several overlapping violent conflicts within the region have not only triggered massive exoduses but also killed and injured hundreds of thousands, and threatened the welfare and security of generations to come. Along with individual lives, the web of social relations that connects individuals, groups, and communities is a casualty of these violent conflicts.

However, there is an opportunity to mobilize the international community to do more and to do it in a different way. Current responses are not only frequently inefficient and unsustainable; they also run the risk of producing further fragmentation of local societies and fueling more violence. Furthermore, they too often focus on the immediate symptoms, giving very short-term answers to situations that require long-term commitments.

The report explains why the fates of refugees, internally displaced persons, and other impacted communities across the region are, and will remain, so closely interconnected. Their situations may present distinct sociopolitical as well as legal characteristics, but the dynamics that force those people to move are similar. Moreover, what people are experiencing today is shaping how they will be able to live together tomorrow.

The report highlights practical suggestions in five sectors of intervention that transcend basic needs like food and blankets. It also presents two series of considerations the international community must bear in mind. The first concerns the way in which international aid agencies interact with local actors. Truly supporting them and their ownership of the recovery process presupposes not only that we comply with a “do no harm” policy, but also that we pay more attention to what local actors need and are asking for, what they already do, and the ways in which they have organized themselves. This requires better targeting and organizing support for local organizations.

The second series of considerations focuses on the support that should be given to countries hosting a large number of refugees in the region. Host countries are shouldering a huge and growing burden, and violence has already spilled over their borders from the countries in conflict. Yet so far, the international community has largely addressed the refugee crisis on a temporary, emergency basis. International and regional organizations and their partners, starting with the European and the US governments, need to acknowledge that the refugee crisis in the Middle East is not a passing regional matter. It is a long-term international problem, and it demands much greater support to host country governments and communities.

It is also time for the donor community, including the Gulf countries, the European Union, and the United States, to exercise political leadership by example regarding refugee burden sharing. The failure to invest now in the future of entire societies would lead to greater problems and more costs down the road. Supporting people’s resilience now is not only a sound political strategy; it is a good economic investment that may save taxpayer money in the future, while planting the seeds for long-term peace and stability.