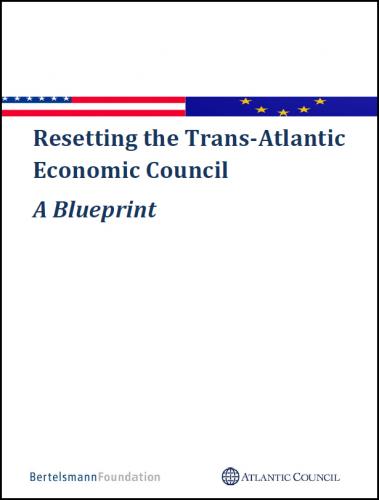 The Trans-Atlantic Economic Council (TEC) is at a crossroads.  It has great potential as a forum for discussing strategic issues between the United States and Europe but is often bogged down in single-issue gridlock.
Download the PDF

In light of the role for the G20 in financial regulation, economic development, energy and climate issues, strong U.S.-EU cooperation within the TEC is increasingly essential.  Progress at the October 2009 gathering will provide an important indication of how transatlantic economic integration will move forward.

This publication, a joint effort of the Atlantic Council and the Bertelsmann Foundation, is intended as a contribution to advancing the integration of the transatlantic economy.  Atlantic Council experts unveiled the report on the Hill for the House EU Caucus.

Agenda-setting for the TEC

Focus on Energy and the Green Sector.

Work together on transatlantic and third-country IPR development and patent protection.

Coordinate on new regulation of financial services and investment.

Address issues of mutual interest in the regulation of food safety.

Designate the U.S. Vice President and European Commission President as Co‐chairs of the TEC.

Create a two‐track system to make the TEC a strategic forum on broad economic challenges.

Guard against protectionism in transatlantic trade and investment.

Incorporate labor into the stakeholder process by engaging with the European Trade Union Confederation (ETUC) and relevant U.S. labor organizations.

Place greater emphasis on stock‐taking, evaluation, and follow up.

Create a Web 2.0 presence for the TEC.

Emphasize the complementarity of the TEC and the U.S.‐EU Summit.