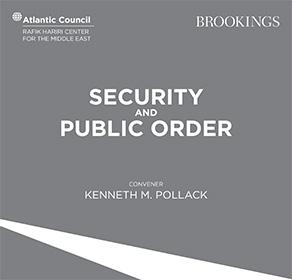 The security situation facing the Middle East is grave and appears to be trending toward greater violence and instability. The Middle East Strategy Task Force’s Security and Public Order report, published in cooperation with the Brookings Institution, demonstrates that states of the region have tended to focus on traditional, external threats but the internal threats they face—from domestic unrest, state failure, and civil war—have become both more common and dangerous.

It is highly unlikely that these security problems will solve themselves or that regional states will be able to resolve them on their own. Given the ongoing importance of Middle Eastern energy resources to the international economy, the region’s central geographic location, its multiplicity of terrorist groups, and the extent of regional anger at numerous other countries for their predicament, it would be a mistake to assume that these security problems will not affect the wider world. Already the problems of terrorism and refugees generated by Middle Eastern upheaval have made many Americans, Europeans, Russians, and Middle Easterners want to take action themselves.

To avoid a catastrophic descent, the Middle East will require considerable external assistance to address its security problems over the short and long terms. Only the United States has the combination of capabilities and potential willingness to lead, develop, and implement these strategies. If the United States is unwilling to do so, it is unlikely that any other state can or will, and the security problems of the Middle East will likely worsen as a result.

Although the United States remains indispensable to such an effort, it should not be expected to shoulder the burden by itself. Moreover, there is reason to believe that other countries—in the Middle East, Europe, Asia, and elsewhere—could be persuaded to do more, including potentially leading a wider campaign in certain areas. This is especially so as refugees, terrorist groups, and other manifestations of spillover from Middle Eastern civil wars increasingly affect other states.

Nevertheless, realizing such support will require the United States to formulate a coherent, feasible strategy; commit itself to leading the effort; and contribute sufficient resources to the effort so that other countries believe the strategy has a reasonable expectation of success.

Ultimately, the only way to eliminate the recurrent, worsening security crises of the Middle East is to help the states of the region address the deep structural problems in their economic, political, and social systems through a process of long-term reform.

In the meantime, important steps need to be taken to address immediate security problems, particularly the civil wars raging across the region, but these cannot be allowed to supersede the need for sustained reform, as has been the case too often in the past.

Longer-Term Solutions
It is critical that the strategies employed by regional and external actors working together to address the security problems of the region be crafted so they do not impede long-term political, economic, and social reform. Instead, these strategies should include steps to enable and encourage such reforms.

Eventually, a critical goal for the Middle East should be to establish an inclusive security condominium 5 along the lines of the Conference on Security and Co-operation in Europe (CSCE), which later developed into the Organization for Security and Co-operation in Europe (OSCE), that can address security concerns via cooperative and collective measures, and enable the reform that is necessary to address the deeper structural problems of the region:

Even as the specter of political instability weighs heavily on the region, the Middle East is quietly experiencing a technological and societal transformation that could hold the keys to a better future. The foundation of this change is based on two powerful components: the rapidly increasing access to technology in the Middle East, and the […]

In recent decades, Muslims have been debating political and social aspects of their religious teachings in new ways. The religious debates are connected to and sometimes stem in considerable part from underlying political and social trends—demographic shifts; rising education; unaccountable and authoritarian governance; stuttering economic and governmental performance; and corruption. They cannot, however, be wholly […]

Rebuilding societies: Strategies for resilience and recovery in times of conflict

The forced displacement of unprecedented numbers of people within and beyond national borders has become an enduring yet fluid phenomenon across the Middle East and North Africa over the past decade. The Middle East Strategy Task Force’s Rebuilding Societies: Strategies for Resilience and Recovery in Times of Conflict report, published in cooperation with the United […]