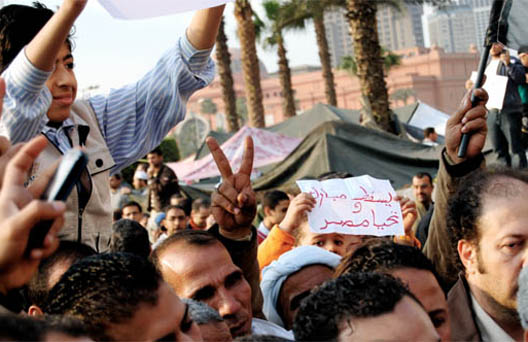 By examining six key themes—political polarization, constitution-drafting processes, transitional justice, economic progress, civil society freedoms, and the future of political Islam—the authors conclude that while the results so far have fallen short of expectations, there is still a strong indigenous commitment to democratic change and a barrier of fear has been irrevocably broken. Citizens in these countries remain firm in their demands for reform and popular pressure will continue to push future governments to realize the goals of the revolutions.

Three years after a wave of popular uprisings swept aside long-standing regimes in Egypt, Tunisia, Libya, and Yemen, the future of the region remains uncertain. The Rafik Hariri Center for the Middle East held a panel discussion on March 11th to discuss the current state of the Arab transitions to look ahead at economic and […]

The final report of Middle East Strategy Task Force Co-Chairs Madeleine K. Albright and Stephen J. Hadley proposes nothing short of a paradigm shift in how the international community and the Middle East interact. Not only does the report suggest ways forward for the region’s most immediate crises in Syria, Iraq, Yemen, and Libya. It […]

The upending of the Middle Eastern order since 2011 came about primarily because of failures of governance. We must properly understand the why and how of this Middle Eastern breakdown if we are to recognize and commit to the work that is truly necessary to build a new, secure, and durable regional order. Investing in […]