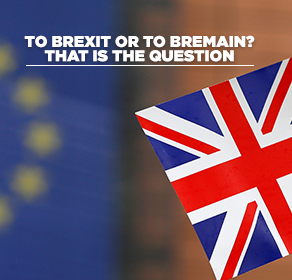 With the impending Brexit referendum on June 23, economists must anticipate the ramifications of the United Kingdom (UK) leaving the European Union (EU). This is the first time the voluntary integration of the EU has been threatened, and creates a distressing existential question: is EU membership valuable enough?


In the brief, “To Brexit or Bremain? That Is The Question”, authors Nauro Campos, a professor of economics and finance at Brunel University London, and Fabrizio Coricelli, a professor of economics at the Paris School of Economics, answer two fundamental questions important for the Brexit debate: Did EU membership significantly affect UK economic performance? And if so, how?

Current economic analysis of potential consequences of a Brexit almost exclusively focus on the UK-EU import-export relationship, underestimating the true cost due to the narrow scope of analysis. This publication aims to narrow this gap by examining three major areas of the economy: trade, FDI, and finance.

The authors briefly discuss the historical context in which the European economic integration project took off, in order to assess to what extent one can claim that delayed membership was relatively costly to the UK and to what extent the UK joining the EU was beneficial. They then discuss the key potential mechanisms through which these benefits took root.

The authors conclude that while international trade may have been the most important driver until full implementation of the Single Market in the early 1990s, foreign investment may have played that role since. The substantial economic benefits from deep EU integration and the consolidation of foreign direct investment (FDI) as a major conduit for these benefits transform the economic case for Brexit into a rather flimsy proposition.

Since increased intra-industry trade, FDI, and financial stability can be attributed to the UK’s membership in the EU, these three areas will all witness dramatic losses if Brexit does occur. The UK will also lose influence in Europe if it loses its EU membership.

Key Findings:
– Historical analysis of the UK’s relationship with other European countries reveals that it was reluctant to join the EEC and EU because it relied on its special relationship with the United States and preferred a free trade area over the more integrated structure of a customs union
– When the UK’s GDP continued to shrink, it applied to the EEC three times before being accepted
– Intra-industry trade, FDI, and financial stability all increased after the UK joined the EU
– These three areas will be hit hard if the UK votes to exit the EU
– The UK will also lose influence in European politics